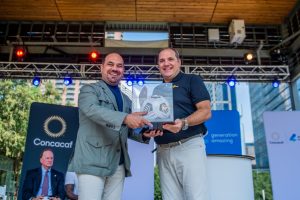 Houston Mayor Pro Tem Dave Martin formally kicked off the football activities by kicking a CONCACAF and Generation Amazing ball onto the field at Discovery Green where 200 children and young people from a range of Houston soccer leagues and programs, and from the Special Olympics, were put through fun and engaging football sessions by CONCACAF coaches.

The event in Houston kicked-off what will be a four-year program that has been developed collaboratively between CONCACAF and Generation Amazing. It will be delivered with each community’s strengths and challenges in mind. In line with the United Nations Sustainable Development Goals (SDGs), the sessions will use an innovative football for social change methodology to enhance equality and social inclusion.

The first phase of this football for social change program, which kicked off this month, will see 11 CONCACAF Member Associations participating, with successive phases set to reach the entire region by 2025, ahead of the 2026 FIFA World Cup, which will be hosted in the CONCACAF region by Canada, Mexico and the United States.

Houston, Texas is also hosting several of this summer’s 2021 Gold Cup matches, including Group Stage games in BBVA Stadium and a Semifinal in NRG Stadium.

Speaking about the launch of the partnership, CONCACAF President and FIFA Vice-President Victor Montagliani said, “We are very excited about this strategic partnership with Generation Amazing and the potential it has to give a tremendous boost to grassroots and community football in CONCACAF. It will benefit all 41 of our member associations, supporting them in their own efforts to grow the game by providing new skills and opportunities to local coaches, who in turn can inspire the next generation. I want to thank the Supreme Committee and other stakeholders in Qatar for their commitment to growing the game in CONCACAF and globally. I must also thank the Mayor Pro Tem of Houston who has given CONCACAF such a warm welcome in the City.”

Commenting on this significant partnership being implemented across the CONCACAF region, Sheikh Hamad bin Khalifa bin Ahmed Al Thani, QFA President, said, “This is another important milestone for the Qatar Football Association as we work with our respected federations across the CONCACAF region to develop grassroots football. This exciting collaboration will enhance social inclusion and we look forward to jointly building a lasting human legacy across the host region of the next FIFA World Cup in Canada, Mexico and the U.S.”

Speaking about the launch of the programme, SC Secretary General, Hassan Al Thawadi, said, “We are delighted to see Generation Amazing working alongside CONCACAF to offer young people, including those from underprivileged communities, the opportunity to improve both their lives and the prospects of their communities through the transformative power of football. The partnership marks another exciting development on the road to the FIFA World Cup Qatar 2022, as we continue to work to deliver a lasting social and human legacy that empowers young people around the world.”

CONCACAF General Secretary, Philippe Moggio, added, “Working together with Generation Amazing we have developed a program that will have a really positive impact on local football in our region. Today’s event in Houston is the springboard for a project that will benefit the entire region. We can’t wait for this roll-out across our region and further support our member associations in their development efforts.”

The programme will enable CONCACAF member associations to optimise their own grassroots coaching education curriculums. It will ultimately provide more local coaches with the skills they need to deliver fun and engaging football sessions for young people in their communities. The course itself will consist of a blended approach of online and in-person learning in which experts from both organisations will deliver specialised workshops to produce training for all coaches, volunteers and stakeholders in each CONCACAF member association.

Coaches will be trained on multiple aspects, including the importance of their role, safeguarding, sport for development and how to use football as a tool to support social change. Once the coaches have been educated with this curriculum, CONCACAF will implement a six-week football for social change programme across local schools, academies and clubs to benefit hundreds of girls and boys aged 8-12.

As with Generation Amazing programming launched across communities in Qatar, the Middle East, Africa and Asia, the expansion into CONCACAF countries will continue to have a significant focus on community coach development, which will benefit thousands of young people across the region, and help ensure a lasting human legacy for the 2022 FIFA World Cup – Qatar.

The partnership between CONCACAF, the QFA and the SC, includes the Qatar national team competing as a guest in both the 2021 and 2023 Gold Cups. Qatar are the reigning champions of Asia after winning the AFC Asian Cup in 2019. The 2021 CONCACAF Gold Cup kicked off on July 10.

CONCACAF has conducted the official draw for the 2023 CONCACAF U-17 Men’s Championship (CU17C). The …