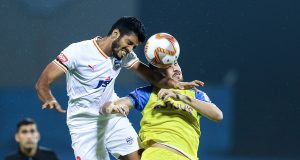 Bengaluru FC’s search for a much-needed win hit yet another roadblock after the Blues went down 1-2 to Kerala Blasters at the GMC Stadium in Bambolim on Wednesday. Cleiton Silva put Bengaluru FC ahead with his fourth goal of the season – an acrobatic volley in the 24th minute. But Kerala Blasters equalised in dubious circumstances after substitute Lalthathanga Khawlhring stabbed home from close in the 73rd minute while Gurpreet Singh Sandhu was down and in need of medical attention after taking a hit to the chest with the ball in the build up to the goal. Rahul KP then scored the winner late into extra time to earn his side the points.

Naushad Moosa made four changes to the side that drew with NorthEast United FC. Pratik Chaudhari, Harmanjot Khabra, Dimas Delgado and Kristian Opseth were replaced by Fran Gonzalez, Suresh Wangjam, Udanta Singh and full debutant Amay Morajkar. Moosa also switched his tactics on the night, with the Blues lining up in a 4-4-2 with Sunil Chhetri paired up front with Udanta Singh.

The opening minutes were a cagey affair, with both sides eager to take control of the game in the midfield. There were attempts at goal on both ends but it was nothing more than regulation saves for Gurpreet Singh Sandhu and Albino Gomes.

The continuous forays into the Kerala Blasters’ half paid off in the 24th minute. Bengaluru won a throw-in on the right and Rahul Bheke’s delivery beat everybody and fell to Cleiton Silva, who took it acrobatically on the half-volley at the far post and beat Gomes with power and placement to put the Blues 1-0 up.

Ten minutes later the Blues had the opportunity to double their advantage. Udanta ran into the box, took it towards the byline and saw his shot whizz past the goal – with replays showing a deflection that took the ball off target.

The final action of the first half saw Gomes making a good, diving save to keep out Chhetri’s freekick.

With the Blues continuing to dominate in the second half, it looked like the Kerala Blasters needed a slice of luck to find a way past the Blues defence and they got in at the end of the third quarter. Gary Hooper’s shot was saved by Gurpreet from point-blank range, who stayed down injured. Kerala Blasters continued to play on and the pinball in the box ended with Lalthathanga turning the ball into the goal to make it 1-1.

Bengaluru FC then denied what looked like a legitimate shout for a penalty in the 77th minute when Silva, in the Kerala Blasters box, was shoved in the back by Sandeep Singh, but referee Harish Kundu believed otherwise.

Substitute Leon Augustine almost put the Blues back in the lead on the 90th minute mark. Gurpreet’s long punt found Kristian Opseth, who passed the ball into the youngster’s path. Leon skipped past a challenge and made his way into the box, but his shot lacked power and was straight into Gomes’ gloves. Only a minute later, another acrobatic effort from Cleiton Silva came off the upright before Juanan’s effort on the follow up was blocked away.

Through the resulting counter, it was Kerala Blasters who took the lead at the other end. Rahul, who managed to clear away, made his way forward and into the Bengaluru FC box before squeezing his shot past Gurpreet at the near post to give Kerala Blasters the win.

Bengaluru FC are next in action on January 24 when they face Odisha FC in a home fixture at the Fatorda Stadium.