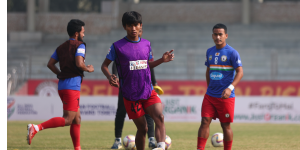 After a gloomy start to their year, Sudeva Delhi FC return to their home turf at the Chhattrasal Stadium in New Delhi to face Real Kashmir FC in the I-League on Thursday, January 12; the kick-off is slated for 2pm IST.

Sudeva Delhi, who earned their maiden points of the season in their last match of 2022 against Mohammedan Sporting, came to the new year with high hopes but were left dejected after facing a 0-2 loss against TRAU. However, they will now look for a chance to put in an inspiring performance against a struggling Real Kashmir, who have failed to win a match on the road since the first week of the season.

“They are a very strong team. They have quality players and a good coach, but somehow couldn’t win their away matches. However, they have played many games this season where they have performed exceptionally well and won.”

Chakraborty also reflected on Sudeva Delhi’s performance against TRAU. “We were good in our last game, but results are everything in professional football. So we will try our level best to get the three points in the match.”

Akeem Abioye, one of Sudeva Delhi’s latest recruits, believes that it’s what happens on the pitch that matters the most. “I don’t think home advantage matters as much. It depends on how you do your job and the way you listen to your coach. If we do this, I believe we will get three points tomorrow,” he said.

Following a slump in form, the gap between league leaders Sreenidi Deccan and Real Kashmir has grown to five points. With their away form increasingly on the slide, the Snow Leopards will see the match against Sudeva Delhi as a perfect opportunity to reignite their away form against the bottom club. 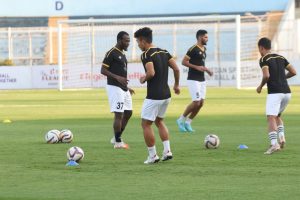 Real Kashmir head coach Mehrajuddin Wadoo said, “I think we started well but went on to lose three games in a row before the draw against Aizawl FC. The only thing I can say is that this is football. It can happen and we have to be ready for everything. We are prepared for the game against Suveda, and we will pay close attention to detail so that we do not repeat past mistakes.”

Wadoo, who was with Sudeva Delhi last season, believes it is more important for them to focus on their own brand of football instead of the opponents. “I know Sudeva Delhi. I was the coach here last season but for me, it’s how we play, not the opponent. We respect Sudeva, they are a good team, but our focus is on how we perform on the day,” he said.

The Snow Leopards have a new signing in their midst, having secured the services of Tajik midfielder Nuriddin Davronov from Mohammedan Sporting in the 2023 January transfer window.

“Sudeva Delhi, as the whole I-League knows, play defensive football, but we care about our football. We have prepared well with the coach and we have to get the three points,” Davronov said.

The match between Sudeva Delhi FC and Real Kashmir FC will be broadcast live on Eurosports and Doordarshan Sports and streamed live on the Discovery Plus OTT platform.