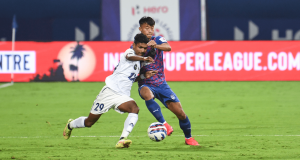 Bengaluru FC skipper Sunil Chhetri was on target for the first time this season as his side played out a 1-1 draw against FC Goa at the GMC Athletic Stadium in Bambolim on Sunday. FC Goa defender Dylan Fox scored the opening goal of the encounter late in the first half, only for Sunil Chhetri to find the level on the hour mark. The result extends Bengaluru FC’s unbeaten streak to six games, as Marco Pezzaiuoli’s side remain in eighth place with 14 points.

Bengaluru FC made several changes to their side, with a combination of injuries and players unavailable due to quarantine. Wungngayam Muirang made his first start of the season, as part of an all-Indian backline that also had Ashique Kuruniyan, Pratik Chaudhari and Naorem Roshan Singh. Iranian midfielder Iman Basafa made his fifth appearance of the campaign, as Prince Ibara, Cleiton Silva and skipper Sunil Chhetri completed the Blues’ attack.

Bengaluru FC started on the offense, creating chances through Silva and Danish Farooq, but FC Goa pulled their way back into the game to make things difficult for Marco Pezzaiuoli’s side. The Blues’ best chance of the half fell to Pratik, who nodded a delightful ball from Roshan goalward, only for Anwar Ali to get in the way. Basafa’s attempt on the rebound was off target.

Against the run of play, FC Goa took the lead five minutes from the break when Dylan Fox found himself unmarked at the far post to nod home a cross past Gurpreet Singh Sandhu. Bengaluru FC’s attempts to restore parity refused to bear fruit in the first period, as FC Goa went down the tunnel with the upper hand over the Blues.

Bengaluru FC made a change at the break, bringing on Suresh Wangjam for Basafa, and Pezzaiuoli was forced into another just ten minutes later when Muirang pulled up and had to be taken off. Parag Shrivas took the field instead, and his first contribution was a long throw that fell to Silva, but the Brazilian’s shot was wide of the target.

On the hour mark, Bengaluru FC found the leveler through Chhetri, who picked his spot with a well-placed header after Ibara picked out the Bengaluru skipper in the box with a cross that was fizzed across goal. Bengaluru FC could have had the lead just eight minutes later, but for Dheeraj Moirangthem’s quick reflexes allowing him to parry away a long-range effort from Roshan.

Pezzaiuoli rang in another change ten minutes from regulation time as Danish and Ibara were replaced by Rohit Kumar and Udanta Singh. Two minutes into extra-time, Rohit, playing in an advanced role, carried the ball forward and found Cleiton, who picked out Chhetri at the edge of the area. His first-time effort, curled past Dheeraj, only to come crashing back into play off the crossbar.

Bengaluru FC made another change in extra time, as 18-year-old Damaitphang Lyngdoh became the tenth player from the Blues’ B-Team to make his debut in the Indian Super League, replacing Ashique Kuruniyan for the final few minutes.

The Blues next face Chennaiyin FC at the same venue, on January 26.