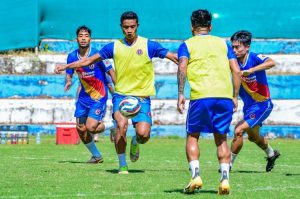 Boosted by their maiden win against FC Goa in this season’s Indian Super League, a resurgent SC East Bengal will be looking to continue their winning run when they take on Hyderabad FC at the Tilak Maidan in Goa.

Hyderabad FC has been on a roll this season, sitting at the fourth position in the ISL table with 17 points from 11 matches, while SC East Bengal occupy 10th place with nine points from 12 matches.

SC East Bengal will be boosted by the return of star forward Antonio Perosevic, who will be making a comeback after serving a 5-match ban, and SC East Bengal coach Mario Rivera is glad to get the Croatian back in the side. “Having Perosevic back will help the team a lot. He is a top-quality player. He is fast, can score, and also assist. He will be very important for us,” Rivera said at the pre-match press conference.

Asked what the win against FC Goa meant for the team, Rivera said, “When you win, the vibe around the training ground is better. While the previous win doesn’t make the next matches easier, it does help a lot in terms of the confidence of the players.”

The Spaniard also revealed that forward Marcelo Ribeiro dos Santos, who was signed by SC East Bengal in the January transfer window, will be involved against Hyderabad FC. “We still don’t know if he will start or come in the second half, but he will be involved,” Rivera said.

Asked about the kind of striker Marcelo was, Rivera heaped praise on the Brazilian. “Marcelo is an authentic No. 9. He is good with the ball and an able finisher who can play between the centre-backs. He is the type of player who may not touch the ball for a while, but will pounce upon an opportunity and score,” Rivera said.

Rivera, who took over from interim coach Renedy Singh before the match against FC Goa and made an instant impact, rated Hyderabad FC very highly. “According to me, Hyderabad FC is one of the best teams in the league. They have a great balance in attack and defence. They are helmed by a very good coach who plays a fast, attacking-based football, and the team also has the highest goal-scorer in the league in the form of Bartholomew Ogbeche,” Rivera said.

Rivera made it clear that he expects his team to play possession-based football, but also acknowledged the fact that making such a tactical change in the middle of the season is easier said than done. “We will try to play with the ball as much as possible. It’s not going to be easy, but we are training every day and the players are getting confident,” Rivera said while signing off.