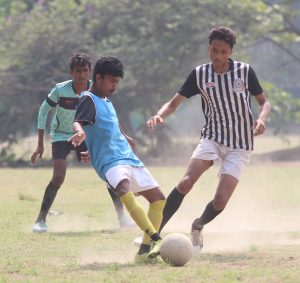 The inaugural edition of the Mohammedan Sporting’s Legends Cup began at High Court Ground in Kolkata on Saturday, April 10 amid much fanfare.

The tournament is an initiative by Mohammedan Sporting Club Youth Development Programme to honour the club legends who have contributed their lives to the club and made it one of biggest legacy based football clubs in the world.

The age category based tournament also provides an opportunity for young players to grow their individual football skills in a professional environment as an introduction to competitive football.

“We are a century old club with a rich history and past. However, we are also working on our future. A future which will not only bring name & success to Mohammedan Sporting Club but also to the nation,” said Mohammedan Sporting Interim General Secretary and YDP chairman Danish Iqbal.

“I strongly believe if all the premiere level clubs in india work together with a common goal of nurturing and developing the youth, then it won’t be far when the day will come where the tricolour flag will be flying up high in the FIFA World Cup,” he added.

20 teams from across four age groups battled it out on Day 1, showcasing their supremacy on the field. Semifinals and final will be played on Sunday. Winner of the competition will get the Md Salim Trophy while runners-up will receive the Md Rahim Trophy.