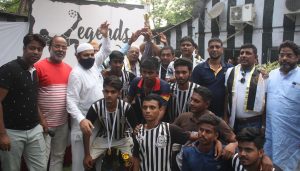 The tournament was a initiative by Mohammedan Sporting Club Youth Development Programme to honour the club legends who have contributed their blood and swaet to the club and made it one of biggest legacy based football clubs in the world.

The age category based tournament also provided an opportunity for young players to grow their individual football skills in a professional environment as an introduction to competitive football.

20 teams from across four age groups battled it out in 5-a-side matches with a rolling substitution system to expand the opportunities for players of all abilities to participate, exemplifying the grassroots spirit of inclusivity.

Speaking on the occasion Mohammedan Sporting Club Interrim General Secretary and Youth Development chairman Danish Iqbal said, “We consider youth development as a very important element of our club. We have a set of highly knowledgeable coaches who are doing fine in shaping up the youth teams. Through this tournament our aim is to create a new talent pool for future.”

“Mohammedan Sporting Club is committed to develop football from grassroots and to meet our goal of designing various programmes that will allow children to be involved in the game.” He also added the need for such programs to be conducted on regular basis.

Senior Vice-President Qamaruddin, who was present on the occasion, stressed the importance of youth development. He mentioned how this completion will make kids enjoy the game at the same time help them learn basics of the game.

Also present on the occasion were Mohammed Akram, Treasurer; Belal Ahmed Khan, Team Manager; and Khalid Sedan, Executive Committee Member; who said in unison that the parents should take advantage of these kind of programmes by Mohammedan Sporting Club and make the most of this opportunity.