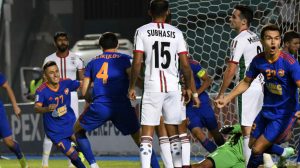 Nasaf’s 19-year-old striker Khusain Norchaev scored a hattrick in the first 32 minutes to rise to the top of the tournament scoring charts, with a Pritam Kokal own goal and Oybek Bozorov’s tap in completing a blistering five-goal first half which delighted the home crowd.

Substitute Doniyorjon Narzullaev added a sixth after the break, putting Ruzikul Berdiev’s side within 90 minutes of their first AFC Cup Final since winning the title a decade ago, with Lee Man FC of Hong Kong all that stands between them and November’s decider.

The India U23 squad departed for Dubai on Wednesday, October 20 morning to take part …