Press Release 2022-11-27 I-League Comments Off on Churchill Brothers desperate for a win as they go up against Real Kashmir FC! 466 Views 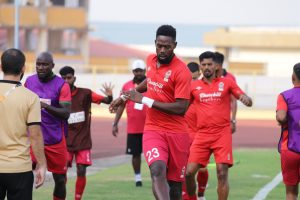 Real Kashmir FC, who are unbeaten and yet to concede a goal in the competition thus far, will face Churchill Brothers in their I-League 2022-23 fourth-round fixture at the picturesque TRC Stadium in Srinagar on Monday, November 28.

The high-flying Snow Leopards have had a solid start to the new season, with victories against NEROCA FC (1-0) and Rajasthan United FC (2-0), and a goalless draw against champions Gokulam Kerala FC. On the other hand, the Red Machines have endured a tough beginning to this campaign, suffering losses at home to Rajasthan United FC (1-2) and Sreenidi Deccan FC (2-3), before playing out a 1-1 draw away to Mumbai Kenkre FC.

The home team will start as favourites in Srinagar, especially with their passionate supporters playing the role of the 12th man. However, the visitors can draw inspiration from their head-to-head record in the league against Real Kashmir, which consists of three draws and three victories.

Last season, it was Churchill Brothers who came out on top by a 1-0 scoreline thanks to a late winner by Kingslee Fernandes, who will certainly have a key role to play for his side in tomorrow’s game as well.
At the pre-match press conference, the home team’s head coach Mehrajuddin Wadoo said “Churchill Brothers are one of the oldest clubs in India and I have played against them as a player also and this season they have a very good team. Yes, they have lost a couple of games but I don’t think that will define their entire season.”

He further spoke about Churchill Brothers’ ball-playing tactics and his outlook for tomorrow’s game. “One good thing about Churchill (Brothers) is that they like to keep the ball, they don’t give away the ball easily. They are hungry for points but for us, the approach would be the same, this is our home game and we are looking forward to a good result,” Wadoo said.

Full-back Davinder Singh has been instrumental for Real Kashmir helping them keep three clean sheets from three games. Singh made his intentions clear for tomorrow’s game, “We just want to win and get the three points. It’s our home game and we don’t want to disappoint the fans, so a win is important,” he said.

Talking about the team’s defensive record, Davinder said that it is basically a team effort. “Everyone is playing well on the team. We are giving our 100% in the games, we don’t want to concede and want to keep the clean sheet.”

On their next fixture, Churchill Brothers head coach Antonio Rueda said, “they haven’t lost or conceded in any of their three matches. We believe we should have nine points but at the moment we only have one, it’s a difficult situation for us and we need to play really well tomorrow.”
The Spaniard further added: “The fans here help the club to victory. Real Kashmir are a team who are very difficult in attack and also in defence. It will be a tough outing for us.”

On the team’s defensive woes, Rueda believes there needs to be a change in the mentality. “We trained during pre-season, and we won the other game against Kenkre. The dynamic in the league is different, our defence is good and we have had chances to win the game. The other teams have had just three or four chances in the game, we just need to change the mentality of not playing with pressure,” he said.

Churchill Brothers defender Momo Cisse reflected on his team’s previous outing, “Last game, Churchill Brothers had many chances but we were not able to score, Kenkre was a compact side, however, what happened in the last game doesn’t affect us, our focus is on the game tomorrow against Real Kashmir,” the Senegalese said.

The match between Real Kashmir FC and Churchill Brothers will kick off at 2pm IST, and will be broadcast live on Eurosport and Doordarshan Sports, and streamed live on the Discovery Plus OTT platform.