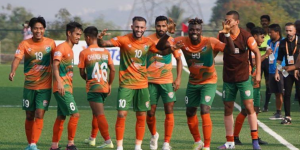 Sreenidi Deccan FC defeated defending champions Gokulam Kerala FC 1-0 in the fourth round tie of the I-League 2022-23 at the Deccan Arena in Hyderabad on Sunday, November 27.

After a series of missed chances at both ends, a second-half long ranger by Faysal Shayesteh proved to be the winner as Gokulam Kerala FC stumbled to their first defeat of the season.

Sreenidi Deccan FC started the game on an attacking note and earned five corners in the first five minutes of the game but couldn’t take advantage of the set pieces. Ramhlunchhunga displayed high energy for the home team earlier in the match and he went close to scoring in the 16th minute. He found himself on the right of the six-yard box with ample space to shoot but he failed to connect cleanly as his effort went wide without troubling anyone.

Sreenidi Deccan’s Mohamed Awal from Ghana raised a scare for his side midway through the first half. His casual clearance found Auguste Boum Somlaga, who almost scored but the Ghanaian recovered in time to block the shot for a corner. The best chance of the half came in the 27th minute for Gokulam when Noufal PN dispatched a cross from the right flank finding Thahir Zaman, whose shot was blocked with a last-ditch effort by Arijit Bagui as the Sreenidi custodian Aryan Niraj Lamba collected the ball.

The midfield trio of Faysal Shayesteh, Mayakkannan, and Konsam Phalguni Singh dominated the proceedings for Sreenidi Deccan and initiated attacks but the Gokulam Kerala defensive pair of captain Aminou Bouba and Pawan Kumar did well to prevent any real threat to their goal.

The second half started on a fast note. Right from the restart, Gokulam Kerala went on the attack as Zaman took a shy at the goal from outside the box that went whiskers away from the top corner. Three minutes later, Somlaga dribbled past Awal and took a shot which went just over the bar.

On the other end, Shayesteh caught the Malabarians on the counter in the 50th minute as he provided a pass for Phalguni Singh, but the midfielder took a rather disappointing shot at the target that fetched no result. The Deccan Warriors finally broke the deadlock in the 63rd minute with Phalguni Singh inutiated a pass for Shayesteh, who took a low shot at the goal beating the Gokulam keeper Shibinraj Kunniyil from distance.

Six minutes after the goal was scored, Phalguni Singh took another powerful shot from inside the box. His attempt was parried well away by the Kunniyil under the bar. Ramhlunchhunga remained a constant problem for the Gokulam defence with his runs through both the flanks. He received continuous support from Shayesteh.

Gokulam Kerala displayed a sense of urgency in their search for the equaliser but couldn’t create any major chance as the Sreenidi Deccan defence stood firm with Awal proving to be a rock for the home side. Following this victory, Sreenidi Deccan have now won three out of their four games and have nine points on the table. Gokulam Kerala conceded their first goal this season as they now have seven points on the table with two wins and a draw from their four games.