The Aftermath – A Jamshedpur FC win that feels like a whole lot more!

Press Release 2023-01-15 Indian Super League Comments Off on The Aftermath – A Jamshedpur FC win that feels like a whole lot more! 1,031 Views 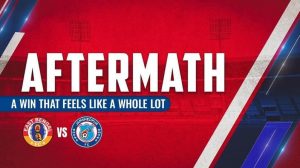 When Jamshedpur FC were last in Kolkata, there was a feeling of injustice in the air that resonated across boundaries and various sections of fans.

After all, a gritty performance away from home ended with a last-gasp and perhaps questionable penalty decision that gave ATK Mohun Bagan all three points and only added to the Men of Steel’s misery at the time.

Coming back to the stadium where all of that went down, a more well-rounded and mature Jamshedpur FC took to the pitch this time around, and the signs of a comeback were visible from the outset.

New signings Rafael Crivellaro and Pronay Halder were now marshalling midfield, and the backline looked much more solid with more players coming back from injury to bolster the squad.

The mentality had clearly undergone a positive change, and the signs were ominous from the last match against Chennaiyin FC at home, where despite conceding twice, Jamshedpur FC had started showing the kind of form that took them to League Shield glory last season.

East Bengal FC, on the other hand, arguably played Jamshedpur FC at the worst time. The team has been struggling on and off the pitch, and needed a big performance on Friday to stay in the good books of their supporters, but got just the opposite in the end, adding to their own woes and piling the pressure on head coach Stephen Constantine.

Jamshedpur FC head coach Aidy Boothroyd selected an interesting team to start the game, with Jay-Emmanuel Thomas a notable absentee in the starting eleven, and Daniel Chima Chukwu starting against his former club.

Two-goal hero from the last game Ritwik Das came into this game full of confidence, and answered the call of the coach, scoring the winner and also winning the “Hero of the match” award for his tremendous display.

But arguably the highlight of the night was the performance of substitute Harry Sawyer. The Australian has been criticised for not living up to the hype since joining the club last summer, but his true striker instincts were on point as he reacted quickest in the box to tap home the equaliser for the Men of Steel.

Sawyer spoke eloquently afterwards about how this win was “for the fans”, who have had to endure just as much pain as the players and staff at the club, but with a renewed spirit among the squad, it seems like the sky’s the limit.

After the game, coach Boothroyd made it clear that his intention is to win all the remaining games in the Indian Super League, and regardless of playoff possibilities, the focus will remain on trying to get three points as many times as possible.

With matches against the likes of NorthEast United FC, Bengaluru FC and Odisha FC still to come, there may be more joy on the cards for a Jamshedpur side that is finally showing signs of recovery and rebuilding, and it appears that the fans are certainly willing to tag along for the ride.