Yellow-Blue brushstrokes the new Hellas Verona away kit by Macron! 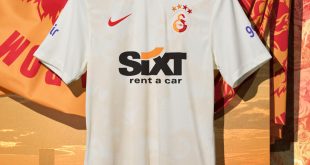 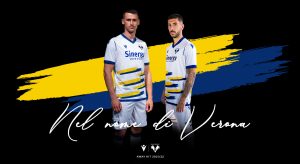 Macron and Hellas Verona have unveiled the new “Away” shirt that the team will wear during the upcoming season. Like the first jersey unveiled a few days ago, the away kit pays homage to Dante Alighieri for the 700th anniversary of his death, as the poet had a strong bond with the city of Verona, which welcomed him for seven years.

The dominant colour of the jersey is white, embellished by a series of diagonal yellow-blue brushstrokes on the lower part and present on the back bottom of the jersey. The new “Away” has a V-neck edged in blue, the same colour present on the sleeve edges. The backneck is personalised with the effigy of Dante and the two dates 1321 – 2021 on a blue background. On the backneck, tone on tone, the word VERONA is embroidered.

The Macron Hero is embroidered on the right chest in blue, while the Hellas Verona crest is on the left, on the heart side. On the inside of the jersey, on the bottom, the words “Ch’in te avrà sì benigno riguardo” are hot-printed, taken from the Divine Comedy, from canto XVII of Paradise. A clear tribute to the Supreme Poet, who sojourned in Verona between 1312 and 1318. 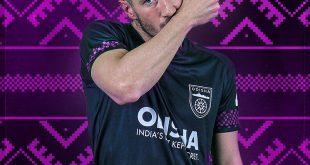