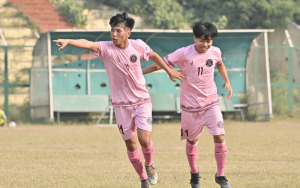 Sixteen teams, fifteen games, six days. The final round of the U-17 Youth Cup 2022-23 will kick off on January 23 in Hyderabad and there is hope that the week-long tournament will produce action to rival the previous round.

A glut of goals had defined the group stages of the tournament, the Punjab State FA U-17 team scoring the most of any team in the competition. Their 20 goals in four games is three more than Garhwal FC, and four more than Sudeva Delhi FC. Sudeva Delhi’s 16 though have come in a mere three games, their goals per game — a whopping 5.33 — far superior to all else.

These three teams have also spread their goals around, Punjab’s 20 goals scored by 10 different players while Garhwal and Sudeva Delhi’s goals coming from the boots of nine and seven different players respectively. While these teams boast of goal diversity, for Himalayan FC Kinnaur, goals have come mainly from their striker Christian Lalthazuala. Lalthazuala has scored more than half (7 of 13) of his team’s goals in the group stage and goes into the final round as the player most in form, and the one to stop. Eight of the 16 teams that have qualified for the final round have players who feature in the top 10 goalscorers of the group stage.

Statistically, KR Football Leaders Club have been the fastest starters of the lot. Two of their players, Krishn Kumar and Akshansh Kumar Munda feature in the ten fastest goals scored in the group stage. Classic Football Academy’s Gogocha Chungkham holds the record for the fastest goal in the group stage though, the defender’s strike against Gauhati Town Club coming almost straight from the kick-off.

Qualification and dominance hasn’t just been secured purely on feats of goalscoring though. Zinc Football Club are yet to concede a goal in the U-17 Youth Cup. A watertight defence has ensured that their 12 goals remain unanswered so far.

Zinc’s miserly defence is in sharp contrast to Rajasthan United FC, who managed a single clean sheet in their four games, conceding four goals in the group stage. Despite that, the club ended up with a +9 goal difference, a far cry from Odisha FC, whose six goals conceded were the most of any team in the final 16. Their goal difference was the reason they finished second in their group.

Muthoot Football Academy are, so far, leading the fairplay charts, having gathered just a single yellow card in the group stage. Rajasthan have been among the worst, collecting eight yellow cards in their four games. None of the 16 qualifiers have had a player sent off yet.

Ten of the final 16 have yet to lose a game in the competition. Garhwal FC, Minerva Punjab FC and Zinc Football Academy, are the only teams with an immaculate record, winning every game they’ve played. Hosts Sreenidi Deccan are among those yet to be beaten. The Hyderabad-based outfit topped their group, having won three and drawn one game in the competition.