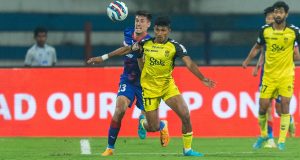 The quick and energetic winger from Malappuram, Abdul Rabeeh, has signed a contract extension with defending ISL champions Hyderabad FC till the end of the 2025-26 season, the club announced on Tuesday.

Rabeeh, who joined Hyderabad FC in the summer of 2021, was impressive in the Durand Cup, under coach Shameel Chembakath.

The youngster was promoted to the first team after this impressive stint and was a part of the first team that won the Indian Super League trophy in the 2021-22 season with Hyderabad FC.

Currently an integral part of Manolo Marquez’s squad, Rabeeh has been effective when called upon in the ISL this season.

“I am really happy to be a part of this club. We are all a family here and we help each other improve and learn every day. I aim to become a better player and hope to continue being an important part of the plan,” said the 22-year-old, after penning the extension.

Rabeeh, who made his ISL debut under Manolo last season, now has 11 league appearances for the club this season, to add to the three appearances in his debut season. He has also bagged two crucial assists and is fast becoming a fan-favourite at Hyderabad.

“The fans at Hyderabad FC are really caring. They show their love on social media and I hope they will also show up in numbers to push the team in the stadium,” Rabeeh added.

Rabeeh was also a regular in the Reliance Foundation Development League 2022, where he bagged a couple of Man of the Match awards with the reserve side.