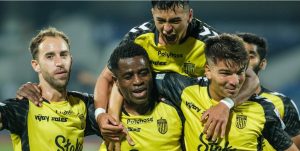 Hyderabad FC put on a professional display to take all three points from a tough night in the Friday-night Indian Super League clash against Bengaluru FC here at Sree Kanteerava Stadium.

Bartholomew Ogbeche (26′,44′) scored twice in the first half to push Bengaluru FC back as Joel Chianese added a third in the 90th minute as Hyderabad FC registered a 3-0 victory on their second-ever trip to this venue.

This win takes Hyderabad FC back to the top of the league table, temporarily with 25 points from 11 games.

Coach Manolo Marquez was forced into making four crucial changes to the starting XI but it was the skipper, Bart Ogbeche, who found his goalscoring form when the team needed him to.

The Nigerian striker scored for the first time in almost two months after Borja Herrera and Halicharan Narzary did well to set him up with space just outside the box. It came from a well-worked free-kick straight from the training ground and BFC were hit before the half-hour mark.

The hosts tried to push, creating a couple of half chances, but Ogbeche was there to double the lead after Narzary’s cross was too good for the Bengaluru FC defense.

Hyderabad went into the break with a cushion but came out with intent, constantly threatening Gurpreet Singh’s goal. Roy Krishna, Sunil Chhetri, Pablo Perez and Javi Hernandez were kept quiet for most of the game with the likes of Nikhil Poojary, Nim Dorjee Tamang, Akash Mishra and Odei Onaindia never gave them an inch.

Udanta Singh came off the bench to trouble Hyderabad down their left but it was all wrapped up when Abdul Rabeeh’s strong run broke the Bengaluru FC defense apart.

He got into the box with sheer pace and pulled it back for Joel Chianese, who made sure he put his shot well beyond a diving Gurpreet.

Hitesh Sharma, Borja Herrera, Rohit Danu, and Javi Siverio also played their part as Hyderabad defended as a unit to register what was their seventh clean sheet of the 2022-23 ISL campaign.

Hyderabad FC are back in action when they welcome NorthEast United FC to the Gachibowli Stadium on Thursday, December 29.