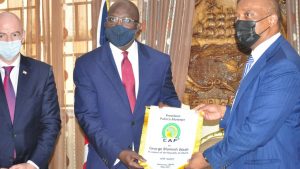 CAF President Dr Patrice Motsepe has concluded a successful visit to both Liberia and Sierra Leone together with FIFA president Gianni Infantino.

In Liberia president Motsepe met country head of state, President George Weah – the only African to win the FIFA World Player of the Year during his playing days together with President of the Liberian Football Association, Mustapha Raji.

During their visit in Monrovia, Liberia, Dr. Motsepe and Mr Infantino announced that Mr Weah will be the first ambassador of the FIFA/CAF Pan African School Football Challenge.

President Weah thanked the FIFA and CAF presidents and promised to do more to improve football in the continent.

CAF President Dr. Motsepe said, “The visits have been very important for me to discuss with key stakeholders the future of African football. Coming together and working as a united force, we can make progress in African football.”

The CAF President also highlighted the importance of promoting development and education amongst the youth in the continent.

“We want young girls and young boys to take football as a career because you can maintain yourself, make money for yourself and family. We also want them to study and get the best education,” Dr. Motsepe said. 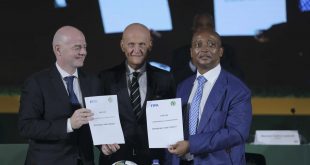