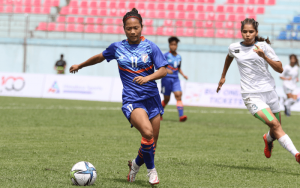 Blue Tigresses star Dangmei Grace, one of the current team players to play her trade abroad admits that she has learnt to be more responsible over the years.

Currently spearheading India’s attack in the SAFF Women’s Championship 2022 in Nepal, Grace sounded extremely “delighted” after scoring against Pakistan as India began their campaign in the Championship with a 3-0 victory on Wednesday, September 7.

“It was nice to score. I have more responsibility for my team as a senior player. I like to contribute in whatever fashion possible,” Grace averred.

Grace is currently playing her club football overseas, after having signed a professional contract with Uzbekistan club FC Nasaf, and has even scored in a friendly match.

“When I joined the club, in my first session the Uzbek National Team players recognized me. We have played against them so many times. The players are very aggressive, and technically very strong. They feel that Indian women’s football is evolving,” Grace mentioned.

“The players in unison admitted that Indian women footballers are very confident nowadays. It felt so nice to get a compliment from them. I joked that the next time we play Uzbekistan, we will beat them,” Grace laughed.

“We think it is impossible to play abroad, but now every woman player is chasing the dream. This is why women’s football is growing in India.”

Grace spent almost two months away from home, managing everything by herself. “It’s all new over there. The culture, the food, the people – everything is so different. Obviously, I took time to adjust. But overall, it’s an amazing experience.”

“Living in a foreign land, I have learnt to manage everything on my own. I cook my own food, and at times post training it becomes very tiring. But I have to manage,” she smiled.

Grace joined the Indian team in Kathmandu to play in the SAFF Women’s Championship, and make her SAFF appearance for the third time.

“I am sharing my experiences of playing abroad with my team mates. The youngsters ask me so many questions. I know they are good enough to play abroad too, and feel they will follow suit soon.”