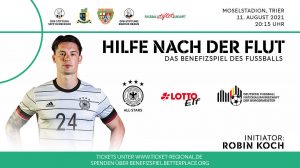 On August 11, a selection of the DFB-All-Stars will take on the LOTTO XI and a team selected by the German mayor at the Moselstadion in Trier in a charity match. Proceeds, including a minimum donation of over 100,000 Euros from the DFB’s Egidius Braun and Sepp Herberger foundations, will be given to those affected by the flooding in Rheinland-Palatine and North Rhine-Westphalia. ‘Help after the flood: football’s charity match’ will take place on Wednesday, August 11 from 20:30 (CEST) and will be broadcasted live on Sport1.

Germany international Robin Koch (Leeds United), who played for the Eintracht Trier youth teams and Oberliga team from 2009-2015, initiated the invitations. Rheinland-Palatine Minister-President Malu Dreyer has taken over as patron of the event. The DFB-All-Stars will be managed by three-time Bundesliga winning coach Otto Rehhagel, and the game will be refereed by Dr. Markus Merk, named World’s Best Referee three times. Male and female internationals will play together for the All-Stars which will certainly provide an interesting match-up.

The DFB-All-Stars have named many well-known players who have announced their intention to help victims of the flood, including Guido Buchwald, Marcell Jansen, Jens Nowotny, Renate Lingor, Lena Lotzen and Roman Weidenfeller. In the LOTTO XI squad are, among others, Hans-Peter Briegel, Dariusz Wosz and David Odonkor.

Robin Koch has said, “The images that have reached me in Leeds recently are terrible. From the very beginning, it was clear to me that I want to help and support the people in the area. Unfortunately, I can’t be there in person due do pre-season commitments with Leeds United. Most importantly, we need unity, cooperation and solidarity to recover together from this catastrophe. Our thoughts are with the many victims of the floods.”

Minister-President of Rhineland-Palatinate Malu Breyer added, “We know of 138 deaths in Rheinland- Palatinate alone, and countless who have been physically and emotionally wounded. I thank all those involved for their action and hope that the money raised can be used to directly help those affected. Let us all show that we stand together – now and during the rebuilding process.”

Contributions can be made through the website betterplace.org or the auctioning website unitedcharity.de (Fußball stiftet Zukunft). Various public figures have already pledged support.

Due to an ankle injury, Klara Bühl has been forced to withdraw from the Germany …