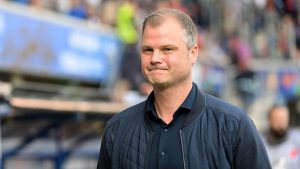 VfB Stuttgart have appointed a new sporting director in Fabian Wohlgemuth, who joins the club from SC Paderborn.

Wohlgemuth takes over the position of sporting director at VfB Stuttgart with immediate effect. The 43-year-old has signed a contract with VfB until June 30, 2025.

Alexander Wehrle, VfB Stuttgart CEO, said, “With the change of sporting director, we want to set both a new impulse and a sign of continuity. Fabian Wohlgemuth fits our profile perfectly. He’s proven recently at Paderborn that even with limited resources, he can put together a valuable squad that plays attacking, passionate football. He also brings great experience at youth level. Fabian Wohlgemuth joins our established, competent team of Markus Rüdt and Thomas Krücken, which enjoys the utmost faith of the whole club and will be supplemented with Christian Gentner from January. With this line-up, the operational heart of our club, the sporting side, is excellently positioned.”

Fabian Wohlgemuth said, “VfB have set standards in the history of German football. It’s a vibrant club with a magnificent fan culture, an exciting team and unbelievable potential. At the same time, it’s clear that both the sporting and financial challenges at VfB will test our team spirit. I believe that things work particularly well when they’re born in a team and are worked through together. The talks with Alexander Wehrle and the rest of the VfB management have completely convinced me that’s the way things are thought and done here. I’m really looking forward to working towards a successful future with everyone at VfB.”