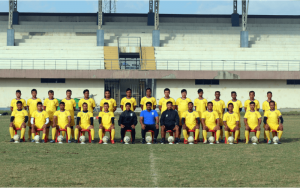 A host of current and former professional footballers attended the AIFF E Certificate Coaching Course held at the Wangjing Sports Complex in Thoubal District. This was the first time that the governing body of football in the state namely the All Manipur Football Association (AMFA) has organised courses outside Imphal.

“Manipur has tremendous talent in each of its districts and our goal was to reach out to the footballing hotbeds starting with Thoubal which has produced a string of players for both the Mens and Womens National team over the years. My heartiest congratulations to DFA Thoubal who conducted an excellent course alongside the support of the AIFF.” said AMFA President Ratan Singh, who is also a member of the newly formed AIFF Grassroots Panel under the current administration.

“I was unaware of the demands of grassroots football coming into the course but over the four days we were made to understand the finer aspects of coaching at this level and I have been able to take away a lot of learnings and look forward to implementing this with my own academy student”, Thoi said. He is also the League Operator for the TS11 Golden Baby League which is held at the Thoi Football Arena which engages over 200 children every year.

More than 100 children attended the Grassroots football festival held at the conclusion of the course.