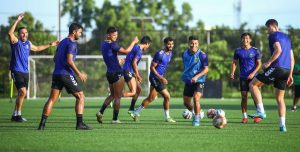 After a thrilling comeback to beat fellow-Indian Super League side Chennaiyin FC last week, Hyderabad FC will look to consolidate their place atop the Group-C standings of the Durand Cup, when they take on local side NEROCA FC, at the Khuman Lampak Stadium here on Tuesday.

With the race for qualification heating up across the four groups, the clash will be an all-important one for both sides who are unbeaten and currently occupy the top 2 spots in Group-C. Hyderabad, who beat TRAU FC and Chennaiyin in the last two games, remain at the summit while NEROCA, who beat TRAU in an Imphal derby earlier in the campaign, drew with Army Red FT in their last game and stand second, with a chance to go atop with a positive result in this clash.

Khogen Singh, the Head Coach of the Imphal-based side, has seen his team concede just one goal so far this campaign. The likes of Ragui Tangva, Shimray Thomyo and Chidi John were on the scoresheet in the game against TRAU FC but NEROCA have quality all around the park and could prove to be a tough test for the Champions of India, on Tuesday.

Hyderabad needed a Bartholomew Ogbeche brace and a Joao Victor penalty to secure all three points against Chennaiyin FC in the previous game. But Head Coach Manolo Marquez has now used 23 players in the first two games of the campaign, hoping to get everyone ready for the business end of the tournament.

“We used a lot of players but we know we are playing in the oldest tournament in Asia. So, it is good for the players that they feel important. We still have two games to play in Imphal and more players will get minutes,” said Manolo, about getting the squad fit and ready.

“We are still in pre-season but three points are very important. We are playing a prestigious tournament and we want to win every game,” he added.

Keeping every player fresh, and giving them enough minutes, Hyderabad have made a strong start to the Durand Cup campaign and will hope to cement their place at the top of the group table with a strong performance in this tie.

With the home team in action and Hyderabad acting as a crowd puller in Imphal, this game is expected to be played in front of a packed Khuman Lampak Stadium under the lights and promises to be a thriller.

The game kicks-off at 6pm IST and will be telecasted live on Sports 18 and streamed on VOOT app.