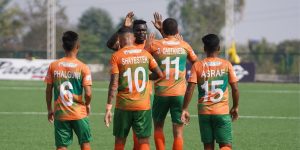 Sreenidi Deccan FC extended their lead atop the I-League points table with a solitary-goal victory over Mumbai Kenkre FC at the Deccan Arena on Saturday, January 7.

The scoreline says 1-0 but does not reflect the home team’s complete dominance over the midfield, led by Afghan recruit Faysal Shayesteh, who scored the only goal and picked up the Hero of the Match award. The Deccan Warriors had 15 shots on goal, compared to just four by their opponents, and enjoyed 66 percent possession.