India U-16 Girls go down 1-2 to hosts Mongolia in AFC U-16 Championship qualifiers! 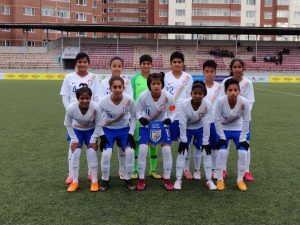 Amidst extreme weather conditions, where the average temperature has been hovering around zero degree Celsius for the last couple of days, India U-16 girls staged a gritty display but that was not enough against the hosts Mongolia as they went down fighting 1-2 at the MFF Stadium in Ulaanbaatar today, September 21.

Following the result, India relinquished pole position of group B in the AFC U-16 Women’s Championship qualifiers to Laos, who are three points ahead, having played the same number of matches. Laos have garnered 9 points from 3 matches, while India are 3 points shy following today’s result. They are slated to face-off in the final fixture of the group on Sunday, September 23.

Meanwhile, a win against Laos will be enough for India to advance to the second round of qualification, owing to better head-to-head record.

Aveka didn’t take more than 6 minutes to find the target, to hand India an early lead that silenced the crowd that turned up in the support of the hosts. A rash challenge on Anju just outside the box, India earned a direct free-kick and Aveka curled it over the Mongolian wall to bulge the back of the net.

The Mongolians looked more vulnerable at the start, but they recuperated quickly to create opportunities from both flanks. India’s joy was cut short at the half-hour mark when the midfielder Gantamur fired it home from close range which Indian goalie Manisha didn’t have an answer to.

Towards the half-time, India got two back-to-back chances to earn the lead once again but the resilient Mongolian defenders came to the team’s rescue on both the occasions.

On a counter attack, Aveka lobbed a long ball to an onrushing Sunita, whose pass was cut away by a defender before it could find Shilky inside the box in the 42nd minute.

In added time, Anju took it upon herself to launch another attack but her low volley hit the woodwork as the girls headed to the changing room with the scoreline locked at a 1-1.

Aveka came close to securing her brace in the 53rd minute but her right-footed grounder was tipped away by an equally exquisite save from Mongolian goalkeeper Khaliun.

A defensive lapse from India gifted Mongolia their second goal in the 70th minute when Khulangoo tapped it home from close range.

Aveka was brought down on the edge of the box again, but this time she couldn’t repeat the trick as her nimble free-kick jammed into the goalie’s gloves.

India tweaked their strategies towards the final whistle but the Mongolians dug deep to leave the ground with all three points eventually.