ISL-6 opens in Kochi on Sunday night as a hit! 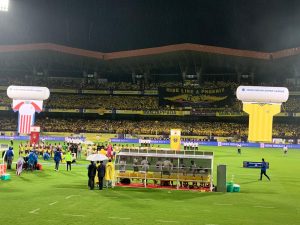 The sixth edition of the Indian Super League kicked off on Sunday, October 20 at the Jawaharlal Nehru Stadium in Kochi. Old rivals Kerala Blasters and two-time champions ATK faced each other in front of a packed Kochi house.

Getting to the stadium on the Sunday night was difficult due to heavy rains in and around Kochi, which therefore resulted in a lack of the usual craziness around the venue as people rather looked for cover than spend time in the other circle of the stadium.

But once you where inside the Jawaharlal Nehru Stadium you got a feel what strong support the Kerala Blasters get at home. The Manjapadda fan group had come out in numbers as had fans of the club from around Kerala despite the difficult weather conditions.

But the guests ATK from Kolkata took an early lead through a set piece goal by Carl McHugh, which silenced the crowd who were unusually subdued following that shocker.

It needed a doubtful Bartholomew Ogbeche penalty to get the home side back into the game and the crowd support was back to its usual self and when Ogbeche scored a brilliant second to put his colours ahead, the stadium erupted into elation as the hosts took a surprise 2-1 lead into the break.

With ATK co-owner and former India cricket captain Saurav Ganguly going onto the pitch with Nita Ambani at half-time, on the way back into the stands, one could see the love and passion of the Keralites for Dada.

The story of the second half is quickly told. ATK was the more active team but they couldn’t score of their few chances while the Blasters were happy to sit back and defend their lead. So the score didn’t change as it ended 2-1 in favour of the Kerala Blasters to the joy of the mainly local fans.

ISL-6 is now on its way and it will have to show where Indian club football stands across the 2019/20 season.