Jamshedpur FC’s next ISL battle is against Kerala Blasters in Kochi!

Press Release 2023-01-02 Indian Super League Comments Off on Jamshedpur FC’s next ISL battle is against Kerala Blasters in Kochi! 334 Views 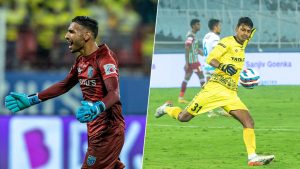 Jamshedpur FC’s next Indian Super League battle is against Kerala Blasters FC in Kochi, and the Men of Steel know that nothing less than a win would suffice as they hope to push up the table and challenge for the playoff places.

Kerala Blasters, on the other hand, come into this game with a bit of good form under their belt, winning their final game of 2022 against Odisha FC and keen to start the new year with a bang.

It was a closely contested game the last time these two sides met at the Furnace, with Kerala Blasters picking up a narrow 1-0 win, but this time the game could be decided based on the individual performances of a few players against their opposing numbers.

The battle of the goalkeepers could be something to look out for in this game as two young custodians aim to help their teams pick up a crucial win.

Prabhsukhan Singh Gill has made a name for himself at Kerala Blasters and will once again aim to lead the Tuskers from the back.

Since winning the ISL golden glove last season, Gill’s stock has risen to new heights, but he will have his hands full against the likes of Ishan Pandita, Jay-Emmanuel Thomas and Daniel Chima Chukwu.

Vishal Yadav, on the other hand, has impressed in a very short period of time at Jamshedpur FC. Since making his debut against ATK Mohun Bagan, the Tata Football Academy graduate has cemented his place in the side and will only get better with age.

Against a tough Kerala Blasters strike force, expect Vishal to stand tall and stand out in goal.

The creative and attacking Rahul KP will be one of Kerala Blasters’ main threats against Jamshedpur FC on Tuesday, but Ricky could well be the answer to put a stop to any attacking momentum.

Ricky has been consistent for Jamshedpur FC during a slow season, and has the defensive know-how to keep the opposition at bay.

Rahul has worked his way up the ranks and emerged as a key player for Kerala Blasters, but will have to be at his best to keep the attacking threat going.

It might not be a given to see Dylan Fox make his debut in Jamshedpur FC colours, but should he start the game on Tuesday, he could see Adrian Luna trying to make his way past him.

Fox has been praised in the past for his superior reading of the game, and he will need all of that and more against the very dangerous Luna.

The Uruguayan can play in multiple positions and set up chances for main striker Dimitrios Diamantakos, and Fox would be key to stopping this from happening.

The Australian will have something to prove in front of his new teammates, and a clean sheet on debut would be certainly something to write home about.