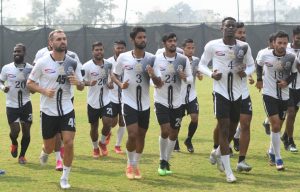 Mohammedan Sporting Club were put through their paces under the watchful eyes of newly appointed Russian coach Andrey Chernyshov as they began their early drills.

The inaugural training session of the season began with an introductory process for the new signings to get to know the current squad members, followed by a fitness session for coach Chernyshov to evaluate the physical condition of the players.

In addition to this, they have signed new players such as Marcus Joseph, Lalramchullova, Mithun Samanta, Shaeer Shahin, Kabir Taufiq, Stefan Ilić and Nicola Stojanovic to bolster their squad.

The process of rebuilding the team ahead of the new season is underway with further announcements expected in due course.

Mohammedan Sporting will hold testing and training sessions before heading a residential camp. As part of the camp, the team will embark on a few training matches with local teams.

Updates will be provided on a regular basis to ensure the supporters are engaged and kept abreast about the new developments.