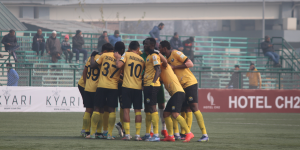 The sixth round of action in the I-League 2022-23 will kick off with an encounter between the top two teams on the points table, as Real Kashmir FC host Sreenidi Deccan FC at the TRC Stadium in Srinagar on Tuesday, December 6.

The Snow Leopards, currently first in the league standings, have enjoyed an unbeaten start to the campaign so far and showed grit to record a comeback win against TRAU FC in their last match. A key factor in their fine run has been their excellent record at home (three wins and one draw) and against a formidable Sreenidi Deccan outfit, the unique advantage of the chilly weather conditions and vociferous fan support will have a major role to play.

The visitors have four wins back-to-back in their last four matches. Like Real Kashmir, the manner in which they secured their most recent win against Mohammedan Sporting is bound to be a massive morale booster, where the team came back from 1-3 down and scored thrice to complete a turnaround victory. Additionally, it will be interesting to see how the side will adapt to the challenge of playing in Srinagar, having contested their last three games at home.

Both sides have previously faced off just once in the competition, playing out a 1-1 draw in Kalyani in the 2021-22 edition.

Addressing the media at the pre-match press conference, Real Kashmir head coach Mehrajuddin Wadoo spoke about tomorrow’s match and called upon the home supporters to turn up in numbers. “It’s good to be unbeaten and at the top of the table but there is a long way to go. Against TRAU, the players showed great character and how important it is to remain focused mentally,” he said.

Wadoo added, “For us, getting the three points tomorrow will be crucial and we want to enter the match with the same mentality. We want to keep trying to play good football for our fans. They are our strength and we want to see them in numbers tomorrow.”

Midfielder Nozim Babadzhanov also spoke highly about his team’s supporters. He said, “This year, the competition in the league is very good and any team can get the better of the other. It has been a great experience with Real Kashmir so far and quite different from what I have seen in other countries. For me, this is the first time I am playing in front of such passionate fans.” 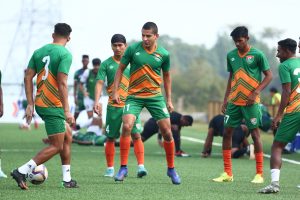 Sreenidi Deccan head coach Carlos Vaz Pinto mentioned his team is not too worried about the cold conditions in Kashmir. “We know our opponents are strong and that it will be a difficult game for us. We know about their way of playing and respect them. However, Real Kashmir also knows that it will be an equally tough fight for them too,” he said.

He continued, “The conditions don’t matter as such — the team that can play with more focus and executes its plans better will come out on top. The league is a marathon and every match is important.”

Goalkeeper Ubaid CK said, “Real Kashmir are a good team. We are here to prove that we are better than them and for that, we will give everything tomorrow.”

The match between Real Kashmir FC and Sreenidi Deccan FC will kick off at 2pm IST, and will be broadcast live on Eurosport and Doordarshan Sports, and streamed live on the Discovery Plus OTT platform.