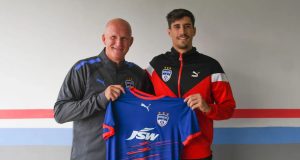 Bengaluru FC have signed Spanish attacking midfielder Pablo Perez on a deal that runs through until the end of the season, the club announced on Monday. The 29-year-old, a product of the Sporting Gijon academy, most recently turned out for Los Rojiblancos in Segunda Division, the second tier of Spanish football.

“I’m really glad to sign for Bengaluru FC and I’m looking forward to the season ahead. My discussions with the coach and few others who are aware of the club and the League were very positive. I’m eager to start training and be able to contribute to the team’s efforts this season. I want to work hard and try my best to help this team reach the playoffs,” said Perez, upon completion of formalities.

Born in Gijon, Perez joined Gijon’s youth setup in 2011, after starting out at Colegio de la Inmaculada as a seven-year-old. He made his debut for Gijon as part of the reserve side in Segunda Division B in the 2011-2012 season. Perez was promoted to the first team in 2014 and made his La Liga debut for Gijon against Valencia CF in 2015. In 2016-17, the midfielder moved to Segunda Division side AD Alcorcon on a season-long loan.

“We’re delighted to have Pablo here with us. What we’ve identified is a player who is very versatile, and can play in many attacking positions. Pablo has several years of experience playing for Sporting Gijon at a very good level in Spain. We’ve watched him, spoken to him and also several others who knew about him, and we felt he was a good fit for us. We welcome Pablo to the club, and hopefully he is a big success for us,” said Blues’ Head Coach Simon Grayson.

The Blues are set to face Kerala Blasters next in their Indian Super League campaign, with a clash scheduled to take place at the Jawaharlal Nehru Stadium in Kochi on Sunday, December 11.