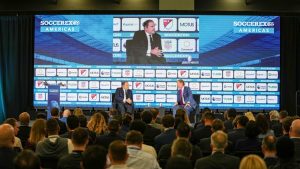 Soccerex returned to live events with a bang as the soccer industry was reunited at Soccerex Americas on March 15/16 at the Miami Beach Convention Center.

Hosted in partnership with CONCACAF, MLS, US Soccer, Mexican Football Federation, USL, LaLiga, Premier League, TUDN, Motus Performance Center and Digital Self, the event welcomed more than 1700 attendees from 65+ countries for two days packed with opportunities for knowledge sharing, networking, business and socialising in person after an almost three-year hiatus.

The conference was partnered with an exhibition where more than 70 suppliers showed cutting edge products and solutions for everything from AR and VR to turf protection to safeguarding in gambling, and saw SportsNL leading a national pavilion of innovative companies from the Netherlands.

Soccerex Americas was the platform of choice for the industry, including more than 750 rightsholders from clubs, leagues, federations and brands from across the Americas and the world, as they were once again able to meet with their peers at both structured and unstructured networking sessions and social events designed to provide valuable connections and long-lasting relationships, and cement the importance of in-person interaction in the development of the industry.

Industry leaders were delighted to be back at Soccerex events!

“It is fantastic to see Soccerex back in Miami. We’re incredibly honoured to have them in our city and for them to be committed to coming to Miami on a regular basis and every time continue to grow this event.” said CONCACAF general secretary Philippe Moggio.

“Whether it’s business or social, the face-to-face social interaction that has left us over the last couple of years is back – that’s how relationships get formed and how connections get established and business gets done,” said Alexi Lalas, former USMNT International and FOX Sports Presenter

“It’s so nice to be back here and around people again at an event where you have some of the most influential and important people in soccer from our region and around the world, it’s nice to see smiling faces and people that are really enjoying it,” said Stuart Holden, former USMNT International and FOX Sports Presenter.

“It’s great to come here and learn, and see the reality rather than see just the papers and regulations, so it’s great,” said Erika Montemor, Head of Player Status, FIFA.

Soccerex will return to Miami for another iteration of Soccerex Americas in 2023, with other event locations and formats for 2022 to be announced shortly along with a new and expanded product line to assist clients to capitalise on the return to business as usual.