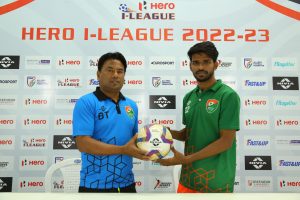 Sreenidi Deccan FC face Mumbai Kenkre FC in a Matchday 10 I-League clash at the Deccan Arena on Saturday, January 7. The Deccan Warriors sit at the top of the standings with 19 points from their opening nine matches while Mumbai Kenkre FC are in 10th place with 10 points.

Ahead of the match, assistant coach Birendra Thapa and midfielder Sriram Boopathi addressed the media. “This was a much needed break as we had a long pre-season before the I-League began. The rest has helped the boys and they are looking sharp and ready to go again,” said Thapa.

Sriram, who won the I-League championship with Chennai City FC in 2018-19, insisted that the team is not getting carried away despite their great start to the season. “The atmosphere in the dressing room is good and everyone is working towards the same goal. We have a good family bond here and we need to take each game as it comes,” he said.

Thapa concluded by giving his views on the opponents Mumbai Kenkre FC. “All teams in the I-League are good and Mumbai Kenkre FC are no exception. They have managed to get good results against some really good teams so we will need to be at our best to take all three points,” he said.

The match will kick off at 2pm IST and will be telecast live on Eurosport India, DD Sports and the Discovery+ App.