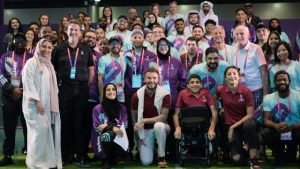 In a tournament of firsts, the first FIFA World Cup in the Middle East and Arab world sees International Volunteer Day fall for the first time ever on a match day this December 5. The rare occasion provides fans and Qatar 2022 organisers the opportunity to pause and recognise the immeasurable contribution of the 20,000 volunteers who support in delivering the greatest show on earth.

To celebrate and honour those seen as the heart of the tournament, tournament organisers will be paying tribute to tournament volunteers on their social media platforms and during today’s matches at Al Janoub Stadium and Stadium 974. In addition to that, the FIFA World Cup Winner’s Trophy that will be taken home by the 2022 champion on 18 December will be available for the thousands of volunteers expected to gather for pictures and a range of activities at the Volunteer Hub located at the Doha Exhibition Centre (DEC).

Since tournament kick-off on November 20, the volunteer force has been at full deployment across eight stadiums and 25 official and non-official sites across Qatar, serving in roles as varied as ticketing, hospitality, language services and media operations. The easy-to-recognise volunteer colours of purple, teal and black have become ubiquitous throughout Doha as a convenient first point of contact for inquiries, providing visitors a comforting human face for the tournament.

Workforce and Administration Director for FIFA World Cup Qatar 2022 LLC Rasha Al Qarni said, “We are so proud of all our volunteers. Not only the ones at the stadiums, but also the ones behind the scenes, helping away from people’s eyes. Their generous spirit can be felt in the positive atmosphere around the city and I’m certain their impact will create a lasting legacy for the culture of volunteerism in the region as volunteers from abroad have had the chance to see what it’s like to be part of a major global event in Qatar, and those from Qatar and the region have witnessed the heights that can be achieved together.”

As another gesture of appreciation, 10 FIFA World Cup ambassadors — including David Beckham, Marcel Desailly and Yaya Touré — paid a surprise visit on November 20 to the Volunteer Hub in the DEC to meet, engage and exchange stories with a lucky group of volunteers. The video of the event will be shared through the volunteer’s digital hub to coincide with International Volunteer Day ceremonies.

Other participants were led to an auditorium space where they were treated to a panel discussion between a select group of specialist volunteers and former England captain Beckham, Danish footballing sensation Nadia Nadim, and Qatari entrepreneur, philanthropist and public speaker, Ghanim Al Muftah. The inspirational talk touched on teamwork, sustainability and accessibility and included heartfelt messages of encouragement for the volunteers on the eve of the tournament kick-off.

Accessibility volunteer Aisha Tanvir said, “There’s so many rewards to being a volunteer, but to know that people like David, Nadia and Ghanim have taken the time to come and share their experiences and to give us their encouragement really reminds us we are part of something much bigger. They’re role models for us who really embody the volunteer spirit and it’s a big inspiration to have them here and to know they support us as volunteers.”

A Day in the Life of a Volunteer

To really understand the volunteer experience from a first-hand point of view, French 1998 FIFA World Cup winner Marcel Desailly, Manchester City and Ivorian superstar Yaya Touré, and Qatari World and Olympic high jump champion Mutaz Barshim went the extra mile and agreed to become volunteers for the day at the busy uniform distribution centre. The three ambassadors were given official volunteer uniforms and briefed in their duties to help distribute uniforms to FIFA World Cup workforce staff and volunteers.

Asked how he enjoyed spending “A Day in the Life of a Volunteer,” Desailly replied, “It was a great experience to understand the dedication, the passion and the commitment of the volunteers. Now we know and we want each of the 20,000 volunteers to know that all their amazing hard work is fully recognized and appreciated. The tournament could not be delivered without them.”

Unsuspecting folks who had arrived to pick up their uniforms were no doubt surprised and delighted to find Desailly, Touré and Barshim behind the counter. Workforce uniform volunteer Wan Nizam said, ““Having these amazing sportspeople volunteering with us was a fantastic experience that I will cherish for life. It was an honour and pleasure to explain our role and guide them.”