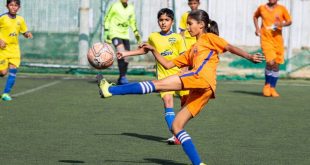 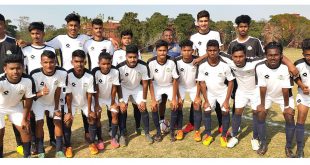 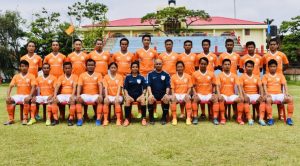 Twenty two coaches participated in the AIFF Grassroots Leaders Course in Imphal, Manipur which fittingly concluded on May 15, 2019 on the AFC Grassroots Football Day. A hundred and seventy players participated in the Football Activities which was conducted by the course participants. Anju Turambekar (Head of Grassroots and Instructor, AIFF) was the Course Instructor assisted by Arki Nongrum (CEO, Meghalaya Football Association). The picturesque Eastern Sporting Union Ground hosted the courses which were organised by Tata Trusts in collaboration with Department of Youth Affairs and Sports (YAS), Govt. of Manipur.

Sixty Coaches and 300 children were educated under the AIFF Grassroots Philosophy over the three week period and will now be conducting Grassroots activities in their respective locations as part of their post-course project work to practice the knowledge and experience gained. Also for the first time ever, four former India Internationals took part in the Grassroots courses.

Gouramangi Singh Moirangthem, one of the biggest stars of Indian football in the last decade shared his experiences as a course participant. “I had a wonderful learning experience, this course is extremely well balanced and focuses on holistic player development. I feel, it would be an ideal situation if all the coaches at any level can go through this course. Everything start from the Grassroots, so each one of us have an equal responsibility to contribute towards the Grassroots, so having more insight will always be an added advantage.”

“We all must appreciate Anju and her team of instructors putting a high level of quality teaching and their commitment throughout conducting the course is commendable.”

Mr. Sinha said, “the Grassroots Leaders Course fits very well into their strategy of developing football from the basics. “The Trusts currently run 90 grassroots centres in Manipur and Mizoram besides working on Baby League in Meghalaya. We also run a residential Centre of Excellence at Aizawl. All these interventions need skill enhancement of the existing and future coaches. The intervention has come at the right time. We appreciate the cooperation from All India Football Association, Department of Youth Affairs and Sports and Eastern Sporting Union,” he said.

Best Grassroots players from various Grassroots along with their parents were facilitated during the opening ceremony to boost their interest.

Armstrong Pame said, “the dreams of many children who grew up wanting to be a footballer will now have a reason to see that their dreams can come true. The football Grassroots schools which has been set up in over 30 places including some of the remotest parts of the state through Tata Trust initiatives will give immense hope to all the children to choose football as their professional career. The recently concluded Grassroots leaders coaching session for the coaches of these Grassroots football schools held from 2nd may to 15th may 2019 has been an immense success with the full support of AIFF. We now look forward to seeing the support of AIFF in bringing football standard in the state Sports Dept. will continue to extend full support to any initiatives of Tata Trusts and AIFF taken up to uplift the standard of football in the state””

“We would like to thank Tata Trusts, Department of Youth Affairs and Sports and Eastern Sporting Union for their support and we appreciate the efforts in holding our hands in developing holistic approach for Grassroots development in the region” said Course Instructor and Head of Grassroots, AIFF, Anju Turambekar.

“It was very encouraging to see coaches along with ex international players trying to raise the bar of Grassroots development by giving their time and displaying the passion for the game. Creating regular playing opportunities for Grassroots players is an essential part of the long-term player development process and having educated Grassroots coaches on board is the key. It will quicken the holistic development approach of the program, which will enhance the performance of the players,” she concluded. 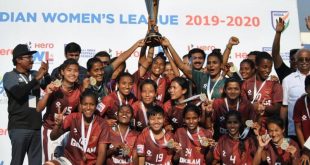 In what can be described as a nail-biting final, Gokulam Kerala FC were crowned champions …