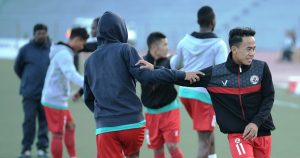 Aizawl FC will be playing host to Punjab FC at the Rajiv Gandhi Stadium in Aizawl. In what will be the first match of Round Five of the 13th I-League, the fixture is scheduled for a 2pm IST kick-off and will be broadcast LIVE on DSPORT.

Aizawl FC played out a 1-1 draw against defending champions Chennai City FC in their previous outing, a result which sees them in sixth place in the table with five points. The 2016-17 I-League champions have an exciting young squad at their disposal but have lacked in terms of tenacity and lethality while going forward.

Players like William Lalnunfela and Joe Zoeherliana have caused serious trouble to their opponents, with the former having already found the back of the net twice. However, Aizawl FC’s strike force have struggled to display any killer instinct so far.

Speaking ahead of the match, Aizawl FC head coach Stanley Rozario said, “As the I-League is progressing, my young players are also getting better and stronger. We have five points from four matches and I’m happy with the performance of my team so far. We have won an away match and drawn two home matches against Mohun Bagan and defending champions Chennai City FC.”

Addressing the concern surrounding his misfiring attack, he added, “In both matches against Mohun Bagan and Chennai City, we created many scoring opportunities but we couldn’t convert it. My new Malian striker Kanoute is also hospitalised and I’m managing with young Mizoram players. They are working hard and they will definitely start converting the scoring chances. I hope my players will give their best and try to score and win the match against Punjab FC.”

Punjab FC, on the other hand, have been in fine fettle, notching up seven points from a possible nine, making the most of a favourable run of three fixtures on the trot at home. However, the only time they played outside Ludhiana this season, ended in defeat, as they lost 0-3 to Churchill Brothers.

Punjab FC head coach Yan Law weighed in on the importance of earning their first away win and said, “All our games are very important, but this one against Aizawl is slightly different as we need to win this game and get our first away points.”

Yan, who will be celebrating his birthday on December 24, has already mentioned to his players what he wants on his birthday.

He added, “Things are looking very positive at this moment and winning which will give me tremendous joy as that is what I asked the boys for my birthday (smiles). It will take us to the top of the table.”