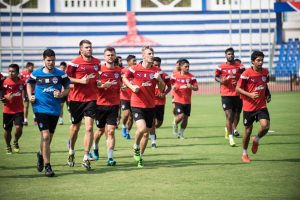 Bengaluru FC Head Coach Albert Roca said a strong finish to the League campaign is what his side have targeted as they ready to face table-toppers Aizawl FC at the Sree Kanteerava Stadium in Bengaluru on Sunday. Having returned from Maldives following a late win against Maziya S&RC, it will be interesting to see the eleven that the Spaniard chooses to field, given injuries and suspensions in key areas.

Roca will be without first choice right-backs Rino Anto and Sandesh Jhingan, while versatile midfielder Harmanjot Khabra, who has also done commendably well in defence when called upon, faces a suspension after his booking against Mohun Bagan last week happened to be his fourth of the campaign.

“It’s definitely a very important game and my players will be fighting for nothing short of three points. We know that Aizawl are looking to stay atop the League and that it means they will come at us with all they have. We have every reason to play this game with motivation,” said Roca, speaking to the media at the pre-match press conference on Saturday.

Brandon Vanlalremdika shot Aizawl FC into the lead when the two sides met at the Rajiv Gandhi Stadium in the reverse fixture with Sunil Chhetri’s equalizer meaning the points were shared in a match that Roca believes saw the Blues fall short in the final third.

“We performed well and created lots of chances but were not very lucky when we played in Aizawl. I hope my strikers will finish well tomorrow and do their bit in the final third because we will have to make sure that our chances are converted. Aizawl FC have a good mix of foreigners and Indians and we will have to ensure that we counter their attack well,” said Roca.

The Khalid Jamil-coached side come into this game on the back of a 2-2 draw against Minerva Punjab FC, their first since the 1-1 against Bengaluru FC in the ninth round. Aizawl FC are on a seven-game unbeaten run, having lost just twice in the League so far, their last defeat coming in a 3-2 loss to Mohun Bagan in February.

The game kicks off at 4:30pm and will be telecast live on TEN 2.