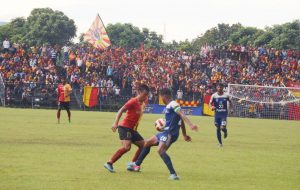 And in the third CFL match it was the third hero for the red and gold as this time Surabuddin Mollick made the difference on the field.

East Bengal coach Khalid Jamil made two crucial substitutions bringing on
Surabuddin Mallick and Gabriel Fernandes by the hour mark with Gabriel giving his team the lead again in the 72nd minute of Plaza and then Surabuddin Mallick scored a quick fire hattrick. First a double strike in the 75th and 76th minute which sealed the win for his team and then a goal late in injury time to end a memorable afternoon.

East Bengal now have nine points from three matches played so far, while Peerless SC after their first loss stay on six points.

@Arunfoot
Previous Manipur-leg pre-qualifiers of the Indian Women’s League set to kick off!
Next VIDEO: Bengaluru FC welcome India’s No.1 Gurpreet Singh Sandhu to the club!