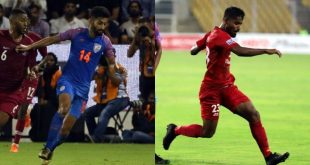 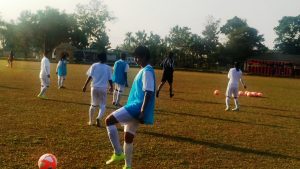 Sanju, the ‘AIFF Emerging Women’s Player of 2016,’ draws inspiration from none but the ‘Dangal’ duo of Babita Phogat and Geeta Phogat to script a newer chapter of Haryana sports, let alone Women’s Football.

“Yes, they have set a benchmark for every Haryana girl. But the struggle they have endured is nothing less than a fairy tale,” Sanju spoke at one go when AIFF Media caught up with her during the SAFF Women’s Championship.

She continued: “I know them closely as we were from the same college. Back then, they didn’t hog the limelight but their struggle, their zeal to scale a height has inspired me since then.”

Only last week Sanju was conferred as the 2016 AIFF Emerging Women’s Footballer of the Year. On being asked how much the award matters to her, the shy girl didn’t hesitate to mention that it is something which never came even in her dream.

“I could never imagine of something so big, that too from AIFF. Really, I’m short of words to thank them. When Sajid sir (Coach Sajid Yusuf Dar) informed me, I could not hold my tears back,” Sanju’s voice almost choked.

“Now I have more responsibility to shoulder and I hope that I could justify the award in the coming days,” the youngster sounded matured and sturdier in the next minute itself.

Nevertheless, she stated that her family always backed her to live her dream of being a footballer.

“Mummy, Papa, Bhaiya saab ne mere ko motivate karte hai, kabhi kisi ne roka nehi mujhe khelne se (My parents, brother everyone have been truly supportive to me. They have never come between me and my playing career),” Sanju mentioned.

The girl left a positive impression on her debut in the South Asian Games 2016 and now she has established herself as a vital cog of the National Team itself.

“Sanju has carried herself really well so far. She is disciplined and knows what is expected of her on the pitch and delivers accordingly,” Sajid Dar, Coach Indian National Women’s Team quipped.

The 20-year old suave midfielder, who came off the bench in the later stage of the second half against Afghanistan in their SAFF Women’s Championship 2016 opener, netted the final goal in the added minutes to seal the win for the defending champions. 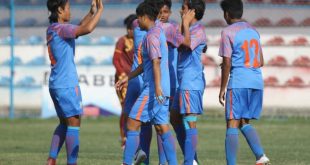