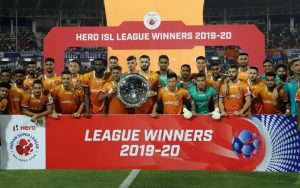 FC Goa are all set for the big stage, taking Indian Football forward together as the first team from the country in the 2021 AFC Champions League, where they have been drawn in Group E.

The Gaurs became the first team from India to get direct qualification for the AFC Champions League after finishing top of the points table in the Indian Super League 2019-20 season.

ATK Mohun Bagan to carry the tricolour in 2021 AFC Cup

Meanwhile, in the AFC Cup, ATK Mohun Bagan will be carrying the Indian Tricolour in Group D, where they have been drawn alongside Basundhara Kings from Bangladesh, Maziya SC from Maldives, and the winner of the South Asian Playoffs.

The aforementioned play-off is set to be played between Bengaluru FC and Sri Lanka Police SC from Sri Lanka on April 14, 2021.