Home / International Football / Asia / India coach Igor Stimac: We were very much like the weather!

India coach Igor Stimac: We were very much like the weather!

Press Release 2019-06-05 Asia, Team India Comments Off on India coach Igor Stimac: We were very much like the weather! 439 Views 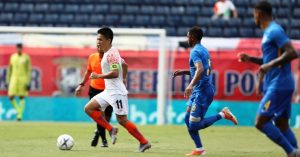 Minutes after India’s 1-3 loss to Curacao in the opener of the King’s Cup in Buriram, Thailand, Indian National Team coach Igor Stimac mentioned “we were today very much like the weather”.

“I think, today we were very much like the weather. At one time the sun was shining, while in the second half there was a storm. After we changed few things in the half-time we started playing better,” he stated. “We were controlling much better – the passion, and the movements, and especially closing down the midfield. That’s what we did with two young players, both debutants coming off the bench,” he maintained.

Stimac was speaking at the official post-match press conference at the Chang Arena.

“Raynier Fernandes, and 18-year old Amarjit Singh – both of whom came on as substitutions in the second half made an impact. Their covering was good. They were coming in front of the big strikers who were creating problems for us. They did not surrender. We did not put our heads down and kept creating chances,” the Coach reflected.

“I think we had 5-6 good situations in the second half to score our second goal and come back, and put some pressure on them in the last 10 minutes. But the decision making was not good in the final third,” he stressed. “For example, where we were supposed to shoot the ball, we were passing; and when we were supposed to pass the ball, we were shooting. There is a long way for us to keep learning – the learning process will be long,” he declared.

“I’m proud of the team achievement especially the manner we played in the second half. The young players who came on showed great character, and had no fear to come on the pitch and playing football. That’s what I like. We have a good future.”

“Congratulations to Curacao. I had mentioned in the pre-match PC that they were the favourites and displayed in the first 45 minutes that they are of a different class. They have 6-7 top quality players. The match is a good blessing for our players. They could feel the touch of European Academy players among the Curacao players – you can feel in their movements, you can feel in their self-confidence,” Stimac explained.

India will now be playing the third place play-off against either Thailand or Vietnam on June 8.

“We go into another phase now in two weeks’ time, get together and prepare for the Intercontinental Cup. We are missing 5-6 players who are very important part of the National teams set-up. As and when they would be back, we would be better.”