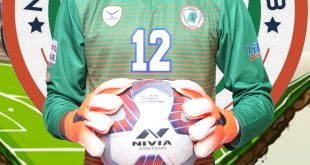 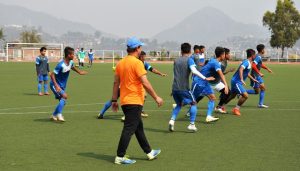 Aizawl FC will host the All India Football Federation’s development squad Indian Arrows at the Rajiv Gandhi Stadium tomorrow, January 23, which is going to be their newly appointed coach Santosh Kashyap’s first home match in this I-League season.

The veteran coach who has taken over the reins after Aizawl FC parted way with Paulo Menezes, is yet to garner a win with the Reds. Santosh Kashyap’s first match was a high-scoring stalemate in Goa and it was followed by a 1-2 loss to Shillong Lajong FC in the capital city of Meghalaya.

The Indian Arrows, who are lying at the bottom of the table after 16 games will need nothing but three points, should they want to climb up the ladder. On the other hand, Aizawl FC are winless in the last eight games and could only garner five points from their last eight games.

The Luis Norton de Matos-coached Indian Arrows are a bit ahead in terms of recently-played games as they have amassed five points from their last four outings.

Speaking to the press on the eve of the match, Indian Arrows’ head coach Luis Norton said, “I’m really glad to be here in Aizawl and I am very proud of the boys. We cannot forget that this is not a senior team and we want to learn and progress in football. After 16 games the expectation was less than what we achieved and 15 points are good. Every team in the league depends a lot on foreigners and we have no foreigners.”

Edmund Lalrindika, who scored his first goal of the season against Aizawl FC in their last match said, “I’m excited to be playing in Aizawl. In our last three games, we won one and drew two. We will play to get three points tomorrow.”

Meanwhile, the former India U-19 skipper pointed out that the crowd support behind Aizawl FC might give the hosts an edge over them.

“If we can play our game, I know we can win but it won’t be an easy game as Aizawl FC always have a huge crowd.”

Aizawl FC head coach Santosh Kashyap spoke cautiously before the match, “We need to think one game at a time. We are in the relegation battle but we will play for three points tomorrow. All the players are good enough to be good in the squad but we lost few player due to injury and sickness.”

“I tried my best in the last game like I always do. We need to win so we will give everything. Every coach has his own plan and philosophy and I think we are on the right path to achieve the target,” Aizawl FC forward Leonce Dodoz chipped in.

The match is scheduled at 2pm and it’ll be broadcast live on Star Sports 2/2 HD and streamed live on Hotstar and Jio TV. 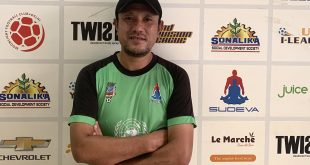