Mohun Bagan & East Bengal selected to be part of #BeActive campaign by FIFA!

Press Release 2020-04-09 I-League Comments Off on Mohun Bagan & East Bengal selected to be part of #BeActive campaign by FIFA! 208 Views 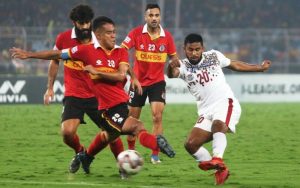 Newly crowned I-League champions Mohun Bagan and fellow Kolkata giants East Bengal Club have been selected by the collaborated forces of FIFA, the United Nations (UN) and the World Health Organisation (WHO) to be a part of the #BeActive campaign, which encourages the fans to maintain their fitness at home.

“More than ever, especially now, one thing must be clear to everyone, health comes first,” FIFA President Gianni Infantino said in a release. “FIFA is delighted to support both the United Nations and the World Health Organization in amplifying the #BeActive campaign today, and we are encouraged that the football community is also playing an active role in ensuring the message is understood globally. For the first time ever, we are all on the same team and together, with team spirit and positive energy, we will win.”

As part of the campaign, the players of the aforementioned football clubs will urge the fans to devote at least 30 minutes (for adults, and 60 minutes for children) per day towards maintaining their fitness, while remaining indoors due to the worldwide quarantine, in order to stem the spread of COVID-19.

The All India Football Federation has also launched its own campaign to help the fans stay fit while quarantining at home – #FitWithIndianFootball.
As part of the campaign, different Indian National team footballers have taken to the screens on social media to explain to the fans different football-specific exercise routines that they can work on at home.