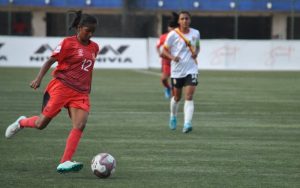 Jasmani Samad’s solitary strike in the 50th-minute was enough for the Odisha outfit to garner their first win after they went down against Kenkre FC in their first-round fixture on January 25.

Bangalore United FC forward Paromita Sit got an early chance to open the scoring as early as in the third minute but her right-footed volley flew over the crossbar.

Although both the teams tried to shift the gear in their quest to break the deadlock, no one could encash the chances in the first 45 minutes.

After the changeover, Odisha Police took not more than five minutes to finally score the opening goal of the match, through Jasmani Samad, which eventually, proved to be the differential factor until the final whistle.

Following a couple of well-coordinated passes with Sasmita Behera, Anima Malik provided an inch-perfect pass to onrushing Jasmani who, having outrun Komal Kumari, slotted it past goalkeeper Vinaya Seshan in the 50th minute to give the Red outfit a well-deserved lead.

Just after the clock crossed the hour-mark, Karishma came very close to double the lead but her freekick form 30 yards ricocheted off the woodwork to leave Bangalore United FC defence relieved.

Following their maiden win in this campaign, Odisha Police will face red-hot Gokulam Kerala FC in their next fixture on at 12:00h on Saturday, February 1) before Bangalore United FC clash their swords with Sreebhumi FC at 3pm on the same day.