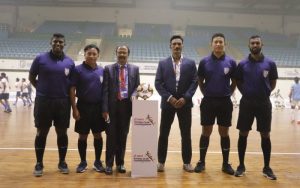 With the inaugural edition of the Futsal Club Championship coming to a conclusion on November 13, the wave of support for the new sport has just begun. Fans from all across India tuned in to watch this innovative, fast-paced, technical game. However, with this, came different hurdles as well, and one of them was the preparation of referees for the tournament. Vishnu Chauhan and Pijush Vishwas were the referee assessors and instructors, who were hard at work with the officials. In an interview with the-aiff.com, the duo shared their experiences with their colleagues in the shorter version of the game.

In the build-up to the Futsal Club Championship, what are the preparations that the referees have gone through?

Vishnu Chauhan: For this tournament, AIFF has taken a lot of efforts in arranging workshops for the referees. Online courses have also been arranged by the AIFF in association with the AFC (Asian Football Confederation), which gives the officials theoretical knowledge about the game. Futsal is a very popular game all around the world, and in the last couple of years the AIFF has been working hard on developing coaches for futsal.

How has your experience been with the referees so far in this tournament? What are your views on them?

Pijush Vishwas: All the referees that have been appointed here are the best referees of futsal from their states. It has been a very good experience bonding and working with them. We are conducting practical, theoretical and online classes for the referees who will be participating here. We, as assessors, are also learning with the referees.

What are the improvements that you have noticed in the level of officiating in the past decade or so?

Vishnu Chauhan: In the past few years, we have seen the level of officiating improve a lot, and there are various factors that can be attributed to that. There are better assessments and better instructors for the referees that are coming up, and the AIFF has worked hard to develop courses and coaching for the referees. These courses have become much more frequent as well, which helps the officials enhance their knowledge and develop their skills. In preparation for the Futsal Club Championship, an online two-day workshop was also conducted by Mr. Vadim Baratov, AFC Futsal refereeing instructor. The workshop was for the participating match officials, and Mr. Baratov was full of praise for them.

As Parallel Sports reports, the inaugural edition of the 2021 Futsal Club Championship held in …