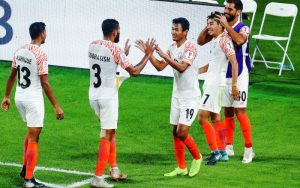 January 6, 2019 will always remain in etched in the history books for the Blue Tigers’ superlative performance against Thailand in their opening clash of the 2019 AFC Asian Cup as the Indian side registered a memorable 4-1 victory. Exactly a year later, AIFF Media sat down with two of the young architects of that majestic triumph – Ashique Kuruniyan and Anirudh Thapa as they recollected the day.

Ashique was a livewire in attack throughout the game and Thapa scored the third goal for India, which he termed as being even more precious than the Kohinoor diamond.

Ashique Kuruniyan: Two days before the match, the coach told me that I would start alongside Sunil bhai upfront. Their right-back was a fast guy and coach wanted me to disrupt him. I was carried away even hours before the kick-off and was still in awe when we reached the stadium.

Anirudh Thapa: I still feel the goosebumps as you say. In the team meeting, when the coach showed us the video and discussed the game plan, I even pinched myself. Yes, I would start for India in Asian Cup. We had faced China and Oman in friendlies but the chance of playing in the Asian Cup is something else. Just unimaginable. The night before I couldn’t sleep properly.

AK: Bro, do you remember what did Sunil bhai had said a day before in the dining hall? The talk where he mentioned Eugune bhai and Sandesh paaji?

AT: Absolutely, how can I forget? As the dinner got over, he, in his signature voice, rattled it out. It was so motivating. Sirf tere liye or yeh team ke liye nehi, soch India mein aur baahar bhi kitne log hai jo humare liye dua maang rahe hain (It’s not about only yourself or this team, every single Indian across the world prays for us) – let’s win it for them.

Think of Eugene (Eugeneson Lyngdoh) who started the journey with us four years back – let’s win it for them. He pointed to Sandesh bhai and said he just goes out and gives his everything on the pitch. You won’t get this opportunity once again in your life. Don’t lose it. I still remember every word he said.

AK: I felt he was speaking to me. Probably, every one of us felt the same.

AT: Eugune bhai and so many other players had sweated a lot to take the team into the Asian Cup. Sandesh paaji is someone who always leads the team from the front and inspires everyone from the back. We couldn’t let that opportunity just go. How was your morning of the match?

AK: I tried to keep myself calm and prayed to the Almighty to stay focused. After breakfast, I took a nap and offered a prayer before lunch. I just stayed away from my phone and spoke to my parents before heading to the stadium. That was the only call I made that day until we came back to the hotel.

AT: Oh really! That’s something you never said before (smiles). I was reading a book and tried to concentrate a bit when I was in my room. Once we reached the stadium I just couldn’t believe what I actually witnessed — so many Indians flooded the stadium and I was still in the zone!

We were given replicas of the match balls to kick to the stands before warm-up and I was just carrying out everything like I was driven by some unknown force. Even 5-10 minutes after kick-off, I could not realise what was going on around me and then slowly, I tried to soak in the pressure.

AK: ‘Pressure’ – exactly. Without a shadow of a doubt, I can say how much pressure I was under. Starting for India in the Asian Cup opener was something which I couldn’t have dreamt in my wildest dream.

AT: But the penalty must have released the pressure?

AK: Absolutely. As per our plan, I was trying to sneak in through left and as the ball rebounded off the goalkeeper’s hand, it caught Bunmathan off guard. The referee indicated to the spot and we took the lead.

AT: But I still remember how Thailand reacted after conceding and even went on to score. The half-time break came at the right moment for us.

AK: The half-time analysis and the next 45 minutes were the best we could have planned, even better. Isn’t it?

AT: That was probably the best 45 minutes of football that we had played until then. Every pass was met with the right person, each movement was anticipated by other teammates perfectly — what else could you have planned? Your layoff on Udanta’s delivery from the right flank and Sunil bhai‘s sublime finish — we just took off from there.

AK: Oh that was a signature Udanta run and I just laid it off to Sunil bhai who is the best in business to kill it off. Next comes yours, bhai! How do you rate your goal on a scale of 1 to 10?

AT: I wouldn’t even trade the goal for the Kohinoor diamond! It’s so precious for me and it’ll always be there at the top of the ladder. When Udanta sprinted from the middle, I made a supporting run towards the right. I had a feeling that the goalkeeper would come out of his position. Even when my chip went in, I could not believe myself. How could a boy like me from Dehradun could go on and score for India at such a big stage? Everyone started celebrating and it was finally when I looked up to the scoreboard that I realized that yes, it was me who did something (smiles).

AK: Jeje bhai‘s finish was so apt. His turn and finishing was out of the world and everything was just perfect for us that night.

AT: When I opened my phone after boarding the bus, it was flooded with messages. I replied to our family group on Whatsapp first before carrying on to other ones. I was feeling so happy and full inside. Even, so many fans followed us to the team hotel. Absolutely exhilarating!

AK: As Sunil bhai said, every single supporter of Indian Football must have had the same feeling. I could have contributed to some extent to the cause — that’s what gives me joy and I’ll always cherish it.

AT: Sunil bhai‘s words sparked the zeal amongst us what I feel. Rest, all just fell in the right place at the right moment.

AK: I also felt the same. Regarding the supporters, I stay a bit confined within myself, you know. We still had two matches to play in the group stage. I headed to my room straight away and hit the bed. I was dead tired.