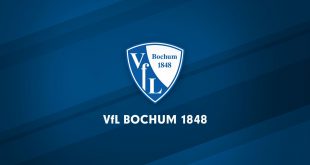 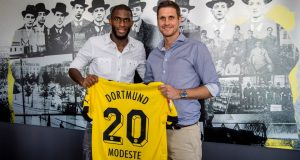 Bundesliga club Borussia Dortmund have responded to the long-term absence of illness-struck Sébastien Haller by signing a new centre-forward in Anthony Modeste. The 34-year-old Frenchman, who is moving to Strobelallee from 1.FC Köln, underwent his medical check in Dortmund earlier today before signing a one-year contract this evening.

“After our analysis of last season, we made a conscious decision to recruit a classic centre-forward who could bolster our offensive game by offering physicality, a strong aerial presence and a goal threat,” said BVB sporting director Sebastian Kehl, going on to add, “In light of Sébastien Haller’s illness, we are glad that, in Anthony Modeste, we have been able to add another striker with this profile to our squad for the current season. He is a seasoned pro who knows the Bundesliga very well, who scored 20 goals last season and who, with his skillset, can fill the exact role that our coach Edin Terzic envisages for the BVB style of football.”

The 1.87-metre tall Modeste, who will wear the number 20 shirt at BVB, is now playing in his eighth Bundesliga season. The Frenchman, born in Cannes, has made 190 appearances in the German top tier to date and notched up 83 goals and 16 assists.

Anthony Modeste comments, “I am very grateful to 1. FC Köln for the wonderful and successful time I had there. However, I have now decided to make a change. The offer from BVB has given me a special chance to play in the Champions League at my age and to prove myself at the highest level. I am delighted about this opportunity and I promise that I will give everything for the success of the team and the club.”