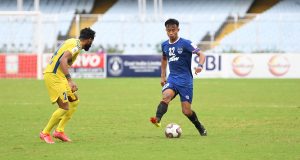 The referee’s whistle blew one last time at the Saltlake Stadium in Kolkata. Damaitphang Lyngdoh’s take had fallen to Naveen Kumar, and the diminutive midfielder sank his face into his shirt. While some of his teammates rushed to him, another bunch lay scattered in disbelief around the center circle. Among them was Naorem Roshan Singh, inconsolable.

“I couldn’t sleep after that game, but I felt that at some point that night, I found my true self as a footballer. Yes, it was unbelievable that we reached the semifinal and everyone only had good things to say even though we had lost. But I couldn’t come to terms with it. I realised that night that I don’t want to settle for good comments or words of praise – I want to win trophies,” says Roshan, speaking from the team hotel in Goa where preparations for the 2021 Indian Super League season are underway.

His village in Manipur, Samurou Makha Leikai, is a tiny dot on the map. The 22-year-old says that as far as his memory can stretch back, he’s had a ball at his feet. “I think I was six or seven years old when I was given my first football, because my father knew I loved the sport. He was a teacher, and even though he’s retired now, in his free time, he teaches children in our locality. Many of them cannot afford an education. My mother sells clothes in the market. I have a younger brother, Vyash, and a twin brother too; his name is Banikumar.”

Barely a teenager, Roshan’s kickabouts in the local ground earned him a trial and then a jersey with the Imphal West District Football Team. One thing led to another, and he was soon wearing the colours of the Thokchom Birachandra Singh Football Academy.

“When I joined TBSFA in 2013, I was still not sure if football was going to take me anywhere. I pushed myself every day and that was because of my father. He was never a footballer, but he was my first coach and my biggest motivator. No matter how well I played, he wasn’t happy. Because he knew I could do better and I think that’s what got me so far.”

Selected to represent the Birchandra Memorial Sports Club, Roshan won the MUPC India final in Goa, in 2013, beating Mumbai FC at the Duler Stadium. Among his teammates was another player who wears Bengaluru blue in Suresh Wangjam. “When we won the MUPC final, I realised that football could give me more than I had imagined if I simply worked hard. It felt really good to win a trophy and to be able to celebrate it with my teammates and I wanted that again. Suresh (Wangjam) was in that team too, and all these years later, our paths have crossed again at Bengaluru FC.”

It’s a quick trip that he wraps in a sentence, but football took Roshan to several places in those years. Winning the MUPC took him to Malaysia – his first trip abroad – and Roshan went on to play in the U-14 Subroto Cup, the BC Roy Trophy and the Manipur Super Division League for Amofa Moirang. Then in 2016, the All India Football Federation came calling.

“To be honest, I just kept playing football as much as I could, and didn’t look for opportunities. Scouts from the AIFF U18 Academy wanted me to join them and when I did, I knew I had to work harder. The players around me were so good, and only a year later we won the U18 I-League. Then, the National Team scouts came, and that’s how I got the chance to play for India at the U19 SAFF Cup in Bhutan and the U19 AFC Cup in Saudi Arabia. I was just a boy from a small town in Manipur who liked to kick a ball. I really couldn’t believe that I was playing for India.”

His performances with the tricolor had several clubs taking note, and Blues’ Assistant Naushad Moosa was one among many coaches who met Roshan, eager to get his signature on a dotted line. Roshan says the decision to choose Bengaluru FC was the easiest he had made.

“When you’re young and doing well, a lot of clubs want you to sign for them. I didn’t really know what to do until Moosa sir came to the AIFF Training Center in Goa. He spoke to me and when I heard the name Bengaluru FC, I didn’t have much to think about. This is a club that does things right and a lot of players may deny it, but every player in the country wants to wear this shirt.”

He mentioned Suresh, but El Torito isn’t the only one Roshan’s path had crossed with a second time when he joined Bengaluru FC. “When we played the MUPC final in Goa, the teams had a chance to meet and interact with Sunil (Chhetri) bhai. I was only 13-years-old then, and not even in my dreams did I think I would share a dressing room with him. But here I am. My target now is to get more playing time and do something for the team. I genuinely feel this season is going to be the turning point in my career.”

Even though the going has been tough back home, Roshan says football has become a way out. “I belong to a middle class family, and growing up, we struggled a lot. Things are a little better now, but there was a time when I would patch up my torn boots together for months because I couldn’t afford new ones. When I got my first salary from playing football, and it wasn’t much, I knew it would make a difference back home. My mother has her business, and both my brothers are studying. I want my career in football to be able to make things easier for them.”

His stepovers are a thing of beauty – you might even call them flawless. And while Naorem Roshan Singh might choose to go left or right, either way feeds his only aim; to keep going.