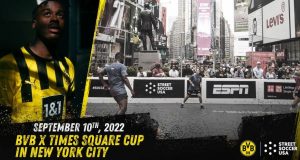 The Times Square Cup is the creation of national non profit Street Soccer USA, whose mission is to fight poverty and strengthen communities through soccer. The Times Square Cup is part of the Street Soccer USA Cup series, the premier 4v4 soccer competition in the country, and features high-paced, high scoring 20 min matches on a pop-up soccer stadium, with live DJs and announcing beginning from 10am in the morning to 10pm at night in the unparalleled setting of Times Square. The Street Soccer USA Cup Series creates transformative events that celebrate and grow the unique soccer culture in the United States while raising funds and awareness for Street Soccer USA year-round programming that makes soccer accessible to the least served neighbourhoods across the country.

Borussia Dortmund, which announced its sponsorship of Street Soccer USA’s Sunset Park Brooklyn Community Soccer Club earlier this year, is renowned globally for the intensity of its fans and of its team, but also for its development of youth talent into the world class soccer players, including Christian Pulisic and the rising American star, Gio Reyna. Borussia Dortmund’s presentation of the Youth Cup, together with the Bundesliga and sponsors GLS Group, demonstrates Borussia Dortmund’s commitment as a leader in youth development and will enable players from Street Soccer USA’s social impact programs across NYC to compete in the inspirational celebration of the global game.

“We are incredibly excited to sponsor and co-host the 2022 Times Square Cup with Street Soccer USA,” said Benedikt Scholz, Director of Internationalization & Commercial Partnerships of BVB. “We believe that soccer should be accessible for everyone. As part of our commitment to helping grow soccer in the United States and providing opportunities for all, this event creates another excellent opportunity for our fans to experience the black and yellow spirit. Through our dedicated grassroots & CSR approach, we will continue to strengthen our brand presence in North America.” As part of the Youth Cup, players will be outfitted in the black and yellow coloured uniforms of Borussia Dortmund and be treated to special appearances from mascot, Emma Bee, and Borussia Dortmund player legends.

“Today, announcing the return of the Times Square Cup and Street Soccer USA Cup Series, is a signal of our ambition as an organization to player a major role in the future of soccer in the United States at the community level, celebrating and promoting our soccer culture, and most importantly ensuring that this great and beautiful game is available to everyone and can be a tool to fight poverty and strengthen our communities,” commented Street Soccer USA founder and president, Lawrence Cann.