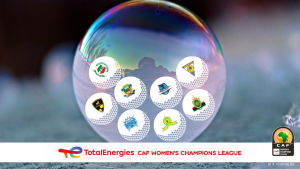 The 2021 CAF Women’s Champions League – Egypt draw will be conducted on Wednesday on September 29, 2021.

The draw will map the road of the eight (8) clubs participating in the tournament scheduled from November 5-19, 2021.

Teams will be divided into two groups of four teams each. The top two from each group will advance to the semifinals.

*As the zone holder of the previous Women’s AFCON 2018, and in accordance to the competition Regulations as home of current champions of Women’s AFCON, WAFU B will have they have two representatives.

Mamelodi Sundowns (South Africa): The club are the three-time winners of the South African Women’s Championship. They won their regional qualification recently in Durban, South Africa.

Vihiga Queens FC (Kenya): The Kenyan side have enjoyed dominance in their domestic competition winning Kenya Women’s Premier League (FKF WPL) in 2017, 2018 and 2019.

*They will have two representatives with Egypt being the second club as hosts.