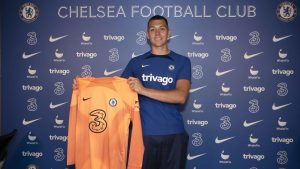 The 18-year-old has signed a six-year contract with the Blues, joining us from MLS side Chicago Fire where he will return on loan to complete their season before moving to west London at the start of 2023.

Considered one of his homeland’s most promising talents, Slonina became Chicago Fire’s youngest signing when he agreed a professional deal with the club in 2019, aged just 14. He is also the youngest goalkeeper ever to start an MLS match, having made his debut for the Fire at the age of 17 years and 81 days in August 2021.

That historic introduction to senior football also brought the first of his 13 clean sheets in the MLS, as he helped secure a 0-0 draw against New York City. The teenager has since become a regular for Chicago Fire, playing every minute of their 2022 league campaign to date. He has made 34 appearances for the club in total.

Slonina has also represented the USA at several youth levels and received his first senior international call-up in December, being named on the bench for the USA’s 1-0 friendly win over Bosnia and Herzegovina.