The global sports rights agency MEDIAPRO have closed agreements to distribute CONCACAF’s 2022 Scotiabank Champions League Final everywhere in the world (with the exception of the Americas and the Caribbean). OneFootball, leading digital media and streaming platform, and GOL, leading FTA sports channel in Spain, will join CONCACAF’s existing broadcast partners to air the highly anticipated final which will be played on Wednesday, May 4th at Lumen Field in Seattle, Washington.

The second leg of the final will see the Seattle Sounders go up against Liga MX team Pumas UNAM in a match that could possibly mark a milestone in the tournament’s history. Neither team has ever won the SCCL and, in Seattle’s case, no team from Major League Soccer has ever won the SCCL. The winner will be crowned regional club champion and will represent CONCACAF at the 2022 FIFA Club World Cup.

Fans are feeling the excitement with over 67,000+ tickets sold, which is a record for a SCCL match. Now, more football fans from around the world will get to experience the thrill of the game from home thanks One Football and GOL.

The SCCL Final will also be broadcast live on FS1 and TUDN/UniMas in USA; Fox Sports in Mexico; ESPN for Central and South America; Flow Sports for the Caribbean. 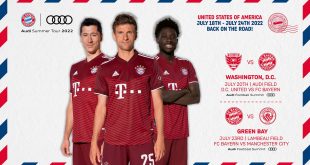