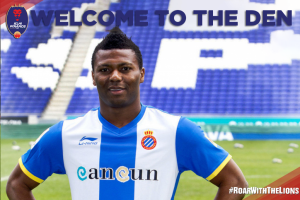 Indian Super League franchise Delhi Dynamos FC have roped in Nigerian forward Kalu Uche as their fourth foreign signing for the upcoming ISL – Season 4. This will be Uche’s second stint in the tournament after previously plying his trade with FC Pune City back in 2015, where he found the net four times in 11 appearances.

The striker has previously represented the likes of Levante, Espanyol Barcelona in Spanish LaLiga and Girondins de Bordeaux in the French Ligue 1. He has also scored five times for Nigeria in 36 appearances, including two goals in the 2010 FIFA World Cup.

Kalu began his career with Nigerian side Enyimba International before moving to Wisla Krakow in Poland, where he won the top division title thrice and the Polish Cup on two occasions. Kalu then went onto represent Almeria for six seasons, helping the side achieve promotion to the Spanish top division.

The veteran forward has also had short spells in Turkey with Kasimpasa and in Qatar with El Jaish and Al Rayyan.

“I am happy to welcome Kalu to the Delhi Dynamos squad this year. Kalu brings a lot of experience to the team having played for Nigerian national team, has had over 175 appearances for Almeria, as well as having played in the ISL in 2015. He will bring toughness both mentally and physically to the team and I look forward to seeing him make a mark on the ISL this year,” Delhi Dynamos Director Rohan Sharma said.